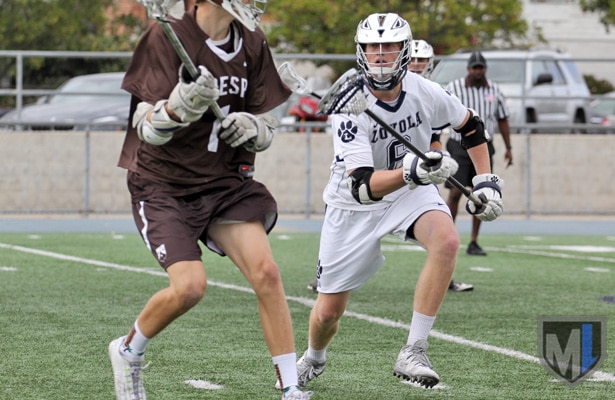 “Nick has started on D since Day 1 at Loyola,” Cubs’ defensive coach Brett Tietjen said. “He has gotten bigger and faster every year and probably will cover the top assignment this year. He’s one of the best GB players I’ve ever coached. He could play LSM or close in college. We also will use him on the wings on faceoffs this year.”

Mohler, who plays club ball for the Los Angeles Cobras, was named first-team All-Mission League as a sophomore last spring after earning second-team honors as a freshman. At St. John’s, he will join 2016 attack/middie Jack Doyle of Crespi, Loyola’s Mission League rival.

“Oran had a really strong summer back East,” Tietjen said. “He’s a big goalie who can get really hot when you need him most.”

Pasadena Poly does not have a lacrosse team, so Holt relied on club programs such as the Cobras, Trilogy’s Conejo Jacks, Tribe Lacrosse (Pasadena) and Silverfin (Thousand Oaks). Tietjen said Holt plans to play next spring for Don Bosco Tech in the Pacific Lacrosse League of non-CIF high school club programs.

Copeland earned second-team All-Palomar League honors at midfield for Rancho Bernardo last spring. He has played for LaxDawgs and 3d Lacrosse San Diego, as well as the Cobras.

“Duncan is a great two-way middie; he can do it all,” Tietjen said. “He has the size and speed to make an immediate impact at the next level. Had an extremely strong summer with the Cobras back East.”

Tietjen and the Cobras are holding a three-day camp Dec. 29-31 at Loyola for U11, U13 and U15 players of all skill levels. For more information or to register, click here.