Loyola Battles Back but Falls to Torrey Pines, 9-7 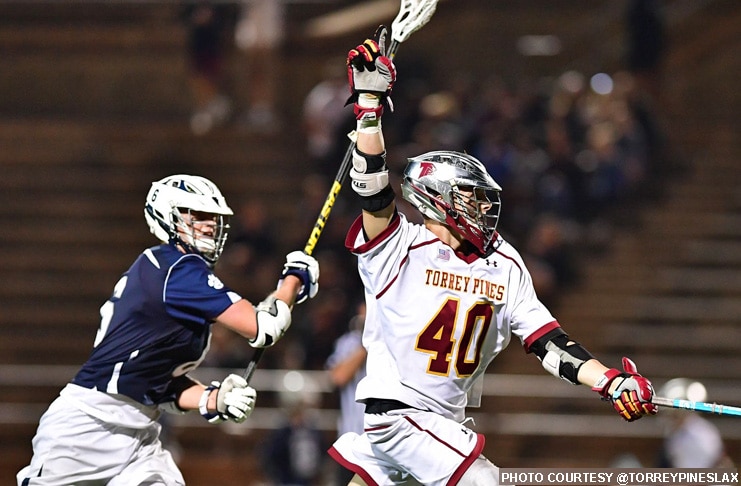 Loyola, the top-ranked team in LA and No. 8 in the Under Armour/Inside Lacrosse West Region Top 10, spotted West No. 1 Torrey Pines a 7-2 lead midway through the third quarter Saturday night, then came roaring back to tie before ultimately losing 9-7.

“My biggest takeaway about my team is that our team has a lot of heart,” Loyola coach Seth Cohen said via text Sunday morning. “It was a great night of competition. I wish every game on my schedule was like that. This game will make us stronger.”

In addition to the UA/IL rankings, both squads also are ranked highly in the Nike/US Lacrosse rankings, with Torrey Pines rated No. 1 in the West and No. 22 nationally, and Loyola rated No. 4 in the West.

“They are a strong team, good at every position,” Cohen said. “Their defense and goalie were impressive.”

Jonathan Partamian and Mason O’Hanlon each scored three goals for the Cubs, and Aidan Hesse scored one. Ryder Mora was credited with two assists, and Partamian, Joe Peterson and Garrett Smith each had one.

But the majority of that offense came in the game’s final 19 minutes. Before that, the Cubs’ offense produced only one goal, and it looked like Torrey Pines might run away with things.

The Falcons won the opening face and scored 38 seconds into the contest. They steadily built on their lead and were up 3-0 before Partamian fed O’Hanlon to put Loyola on the board with under a minute to play in the first quarter.

Torrey Pines led 5-1 late in the second period when Hesse scored off a face-off win to make it 5-2 at halftime. The Falcons tacked on two more in the the third period to lead 7-2 with seven minutes left in the quarter.

That’s when the Loyola offense finally started finding the net. The Cubs scored four unanswered goals to close out the third trailing only 7-6, then tied it 7-7 midway through the fourth period.

Five different players contributed to the scoring in that rally. Partamian got it going on pass from Peterson, then scored again on a feed from Smith. Mora assisted O’Hanlon, then O’Hanlon scored again off a rebound with 47 seconds left in the quarter. Partamian scored the tying goal on a pass from Mora at the 7:24 mark of the fourth quarter.

Thanks to face-off wins from Hesse and a possession-time advantage, the Cubs had scored five goals in the span of 11:36 to erase the Falcons’ big lead.

But they wouldn’t score again, although Cohen said Partamian hit pipe on a rip that would have give the Cubs an 8-7 lead. That lead ultimately went to Torrey Pines, which scored with 2:52 to play, ending a 16-minute scoring drought. The Falcons’ final goal was into an empty net with 14 seconds to play when Loyola goalie Joe Theuer left the cage to chase.

Saturday’s game was the first of four for Loyola against teams from outside of the Southern Section, three of whom are ranked in the UA/IL West Top 10. The Cubs play at West No. 4 St. Ignatius (San Francisco) on April 8, then have back-to-back games at Poway, ranked No. 3 in the West, and Cathedral Catholic on April 18 and 20.

Information gathered from @LoyolaLax and @TorreyPinesLax on Twitter and tplax.com, as well as other sources.