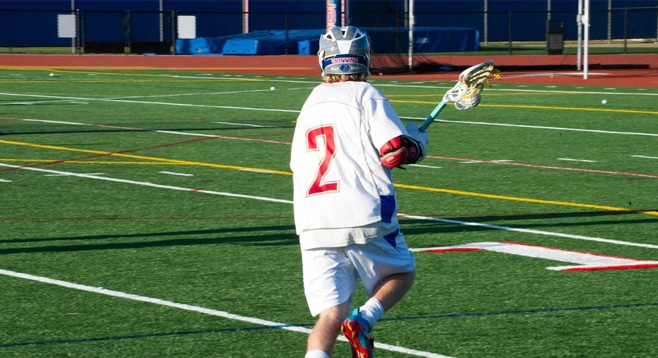 Los Alamitos has had no trouble winning Sunset League games this year and continued their run with a close game against Edison until the fourth quarter.

Edison game planned well from what they learned from their first matchup with Los Al, frustrating a very talented Los Al offense who scraped for their two goals, seven minutes apart by Patrick Baikie (1g, 1a) and Brandon Ezell (4g, 1a). The game was still manageable for Edison who found themselves only down two and with the very dangerous Ben Poploskie in the offensive mix.

Edison would keep pace with Los Al in the second quarter exchanging goals with Los Al back and forth and only finding themselves down three at the end of the first half thanks to goals from senior captain Josh “Davis” Gruwell, Poploskie and Shane Fullbright. Ezell added one more and standout attackman Tyler Miller finally got on the board with one goal and one assist to Andy Barnett. Tyler’s twin brother Cody Miller had the sixth goal of the game as the Griffins went up 6-3 at half.