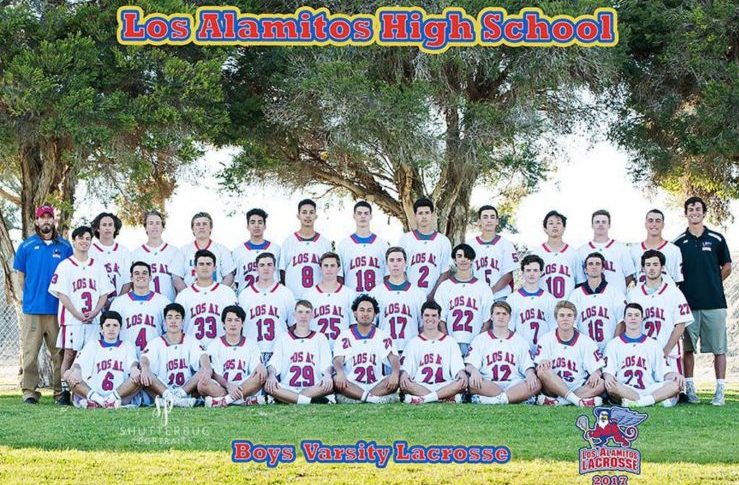 Los Alamitos – For the second game in a row, the Los Alamitos boys lacrosse team found itself down two goals with less than a minute to go in the game. But unlike Monday’s game against Yorba Linda, the Sunset League championship may have been on the line.

The Griffins were on their way to dropping their first Sunset League game of the year, leaving Edison as the only team with an undefeated Sunset League record.  A loss would put the Griffins in the position of playing catch up for the league title.  With two games coming up against Edison and one against Huntington Beach, the other Sunset League contender, this was not a position Los Al wanted to be in.

Then the unthinkable happened in that minute span. The Griffins got the lead down to 9-8. Then the Griffins tied the game at 9-9. Eventually, with eight seconds remaining, Matt Fanelli scored the game-winner to lift No.12 Los Alamitos to a 10-9 win over No.20 Newport Harbor on Wednesday at Los Alamitos High School.

“For three and a half quarters, we (Los Al) did not look our best and NHHS looked dialed in. Near the end, a sense of urgency kicked in and got it done,” Los Alamitos coach Tim Fox said in an email.

Los Alamitos (7-5, 3-0) remains in first place in the Sunset League while Newport Harbor (2-9, 0-4) isn’t so fortunate.  The Sailors dropped their sixth game in a row and remains winless in league after it won 22 consecutive league games dating back to 2014

Los Alamitos, which lost Bronson Ban to a hamstring injury early in the game, led 4-2 at halftime.  Then Newport Harbor came storming back. The Sailors held the Griffins to only one goal while scoring four of their own in the third quarter to take a 6-5 going into the final frame.

The Sailors extended their lead to 8-5 with eight minutes remaining in the game and according to Fox, Los Alamitos woke up.

Ethan Campos started Los Alamitos’ rally by scoring at the 5:36 mark and Fanelli scored at the 4:41 mark. The Sailors answered with a goal of their own with a little over four minutes to play and to make matters worse for the Griffins, they got hit with a penalty, which they eventually killed.

With under a minute remaining, James Sparks scored for the Griffins with 48 seconds left to cut Newport Harbor’s lead down 9-8. The Griffins then tied it up at 9-9 thanks to a goal from Campos with 21 seconds remaining.

The Sailors appeared to be on the verge of going into overtime for the second straight game. The Griffins had other plans, as Fanneli got the ball from teammate Hunter George and was able to score with eight seconds left to give the Griffins the win.

Fanelli led the way for the Griffins with four goals while adding two assists and seven groundballs. Campos had two goals while Ban, Sparks, Trenton Jones and Adrian Rojes each had one goal. Goalie Cullen Murray had 16 saves for Los Alamitos, which is ahead of Edison by half a game in the Sunset League.

Next up for Los Alamitos, a road match on Saturday against Aliso Niguel at 10 a.m. Newport Harbor plays at Marina on Friday at 6 p.m.

Tim Fox contributed to this article.