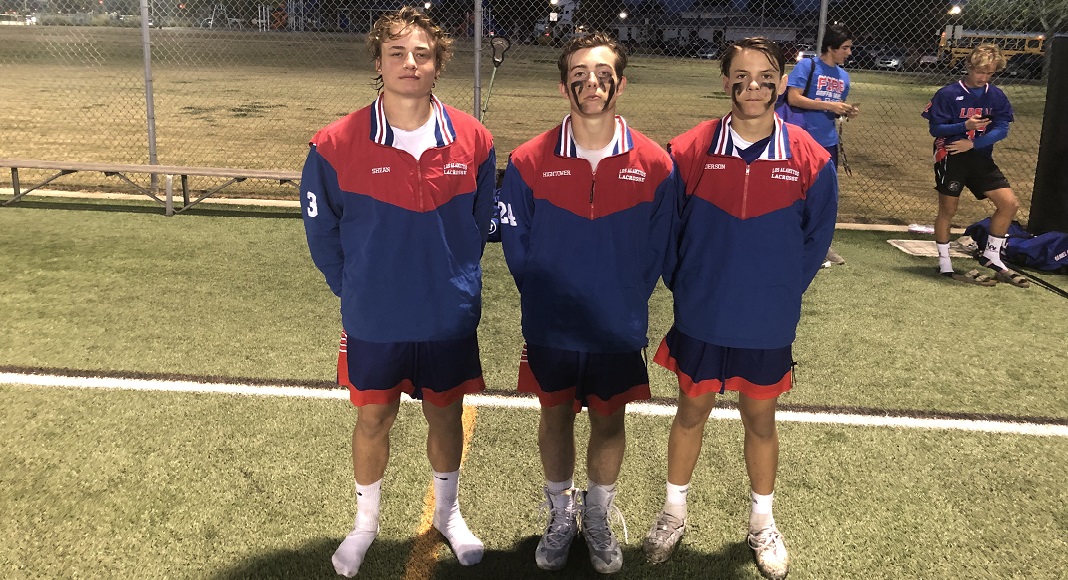 The Griffins (6-5, 3-1), who have two league games to go, play Newport Harbor at home on Friday at 6 p.m. If the Sailors win, they clinch the outright league title for themselves, but if the Griffins win and they beat Edison on Wednesday at Edison, the Griffins, Sailors and Sea Kings share the league title.

Before the Griffins could look forward to their game against the Sailors, they needed to get by Huntington Beach.

The Griffins shutout the Oilers in the second half, as Cade Poe was a force on faceoffs, which gave the Griffins more offensive possessions.

James Hightower (pictured middle) led the Griffins with five goals while Ed Shean (pictured left) and Drew Anderson (pictured right) had four and three goals. Poe, Nick Butao, Nico Kozachenko, Nick Weinmann, Charles Wilson, Matt Caressi and Thomas Dentzer each scored once for the Griffins, who got one save from Guido Cuccia.

“We came in confident ready to win, we picked up all our groundballs and we gave it to our offense and let them eat,” co-captain Daniel Kees said.

After the game, some of the Griffins players flocked over to Newport Harbor High School, to check out the second half of the Battle of the Bay boys lacrosse game between Newport Harbor and Corona Del Mar.