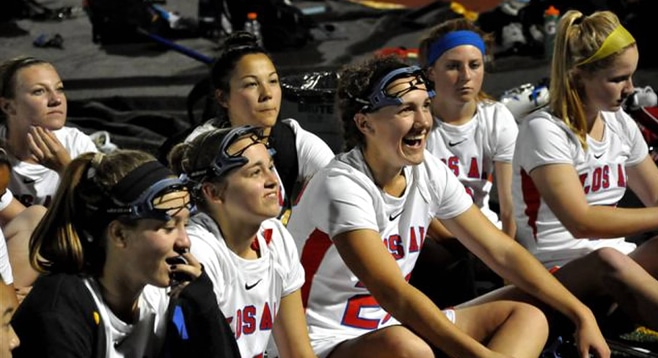 The Los Alamitos Lady Griffins are currently sitting pretty with a 5-0 record for the beginning of the 2014 spring season, and are looking to keep up a winning tradition.

In their opening game against Temecula Valley, the Lady Griffins showed the symptoms of early season jitters when they began the game with uncharacteristic dropped balls, sloppy passes, and miscues in the first half.  The second half of the game, the girls were back to “business as usual” and looked like the team we expect to take the field at a Los Al game. The Griffins were able to capitalize when they were a woman-up to score. Los Alamitos took the victory with a score of 19-4.

Los Al played confidently against Aliso Niguel.  Players in all parts of the field were relaxed and had their heads in the game.  The Griffins were able to adjust their play to various factors that presented themselves during the course of the game to take the win with a score of 19-9.

The Griffins traveled to Coronado, to play the Islanders who are the current San Diego Open Division Championship Runners-up.  Los Alamitos came out strong and dominated the majority of the game. Los Al took advantage of the completion and used game time to work on new plays and allow younger players to get a feel for a varsity level game.  The Griffins earned a W by scoring 10 goals to the Islanders’ 7.

Game four featured Scripps Ranch at home on Los Alamitos’s new turf field.  The depth of Los Al’s team was evident as many different players had the opportunity to take the field.  The Griffins played in a well-organized, thoughtful manner that allowed them to win with a score of 15-6.

Monday night the Griffins competed against St. John’s (Tex.), the Texas 2013 Division I State Champions, at a neutral site.  Los Alamitos dominated the first half of the game by keep St. John’s nearly scoreless.  It took St. John’s over 18 minutes to score their first goal.  The second half of the game saw a multiple of substitutions for the Griffins, a yellow card issued to St. John’s, and the Griffins taking another game time opportunity to work on new plays and competitions skills as a way to keep improving their game.  Los Alamitos won the game with a score of 10-7.