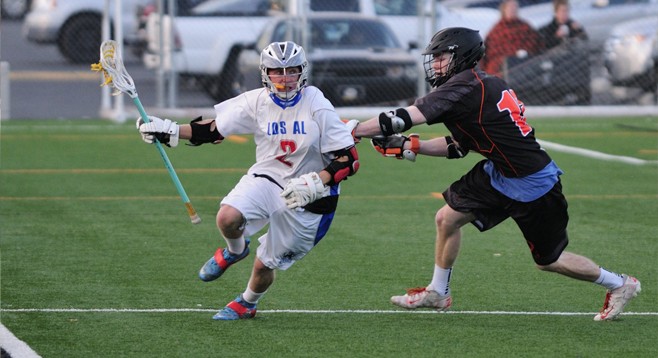 It’s probably not surprising that one team came into last night’s Los Al-Edison game with a 2-5 record and the other with a 4-1. The surprising part is that CIF and Sunset League newcomer Edison possessed the winning record while Los Al was the upside down team. So there more at stake last night than one would have expected a month ago. The Sunset League has been Los Al turf for five of the last six years, the Griffins like it that way, and they did not want any newcomers thinking that they were ready to move in. Anxious to make a statement, the Griffins jumped to a 5-0 first quarter lead and just kept on trucking to an 18-2 win.

The Griffins’ first five goals came in a five-minute span late in the first quarter. Brandon Ezell started a 5-minute goal-per-minute run that lasted five minutes with an unassisted goal at 6:34. Tyler Miller, back-to-back goals by Jake Householder, and a goal by Cody Miller finished the run to make it 5-0 after a quarter.

Los Al turned up the heat a bit in the second quarter when they scored six goals in a five minute span to make it 11-1 at halftime. Patrick Baikie and Andy Barnett each scored their first goals of the game during the run. Householder scored a goal to complete his first half hat trick. Ezell scored two to keep pace with Householder, and Ty Miller added his second of the game.

With the game safely in hand, Ezell and Householder each added two more goals in the second half to give them each five for the game. Andy Barnett and George Sehremelis etched popped in two second half goals to complete the scoring for Los Al.

Ezell (5 goals and 3 assists) ended the game with 8 points, Householder (5 goals and 1 assist) had 6 points. Ty Miller finished with 2 goals and 2 assists, Barnett had a 6 point game (2 goals and 4 assists), Sehremelis had 2 goals, Cody Miller had a goal and an assist. Baikie had 1 goal, and Jayden Silva had an assist.

Los Alamitos (3-5) hopes to even their overall record next while getting a jump on the Sunset League race. They face Marina and Newport Harbor. Edison draws El Dorado and Tustin.