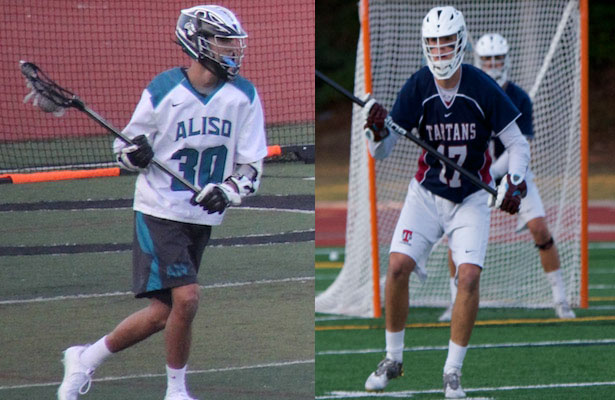 Jake Lombardo (Aliso Niguel) and Zach Shor (St. Margaret’s) were among the 17 incoming freshmen announced by the University of California-Berkeley men’s lacrosse program this week.  Both players were team captains and All Academics their senior year.  Lombardo was an All County Honorable Mention attackman.  Shor was an All County First Team Team defenseman.  The press release from Cal lacrosse is presented below.

BERKELEY, Calif. — The University of California-Berkeley men’s lacrosse program is pleased to announce the addition of 17 incoming freshmen to the Cal lacrosse family this fall. Each one, first and foremost, is an outstanding human being and a gifted student, and we’re excited to welcome them to Berkeley.

This class is not only large in terms of numbers, but some big, strong athletes will be joining the team, and the ones who are not as physically imposing are quick, shifty and tough. All of these recruits are accomplished lacrosse players, and nearly all of them were elected team captain, which speaks volumes to their collective maturity and leadership.

Having only graduated three seniors and one starter, the 2017 Golden Bears have the makings of a stellar roster.

The Cal Lacrosse Class of 2020 (in alphabetical order):

Midfield, Coronado HS, CA
Accolades: National Honor Society…Captain…Three-time varsity team member…West Coast Starz and LaxDawgs club team member.
Intended major: Physics
Hobbies: Surfing, snowboarding, beach volleyball.
Favorite book: The DaVinci Code
Parents: Hope and Bill
Coach’s comments: “I coached Dylan on West Coast Starz two falls ago, and he is as nice as they come. He is 6’3, lanky, very fast and has a big time shot. For a team that would like to create more transition, Dylan’s strengths mesh well with our style of play.”

Goalie, Winter Park HS, FL
Accolades: Valedictorian…Four year Scholar-Athlete…Team Captain…2016 All-American…Two time All-Metro selection.
Intended major: Pre-med/ Biology
Hobbies: Skiing, lifting, basketball, coaching youth lacrosse.
Favorite book: The Things They Carried by Tim O’Brien
Parents: Tracy and Jeff
Coach’s comments: “Nick possesses outstanding qualities for a goalie: he has quick hands and feet, he explodes to the ball, makes clean saves, is athletic outside the crease on the ride and collecting groundballs, his outlets are dialed in, and he communicates firmly and purposefully with his defense. We are thrilled to have Nick becoming a Bear this fall.”

Goalie, Miramonte HS, CA
Accolades: Academic-Athlete…ELC…Varsity Captain…All-League selection.
Intended major: Industrial Engineering and Operations Research.
Favorite book: Fablehaven by Brandon Mull
Parents: Pam and Harry
Coach’s comments: “A lifelong Bear fan, Harrison is the son of a Cal rugby player and a Michigan field hockey, so he has inherited the athleticism and toughness necessary to play goalie. A big lefty, Harrison takes up a lot of cage, forcing shooters to aim for corners. We’re happy to have Harrison and the Drakes in Berkeley.”

Midfield, Highland Park, Dallas, TX
Accolades: National Honor Society… NEHS…NSSHS…Varsity Captain…2015 State Champion…All-State and All-District selection.
Intended major: Economics/ Pre-Haas School of Business.
Hobbies: Snowboarding, fly fishing, basketball, football, golf.
Favorite book: The Lord of the Rings trilogy.
Parents: Amara and Colin.
Coach’s comments: “Jackson is a big recruit for our program and a strong addition to our offense. He’s 6’1, 180, athletic and plays with a ton of passion. Jackson’s experience playing both attack and midfield on one of the best high school teams in the country makes him a threat all over the field.”

Midfield, Chaminade College Prep, CA
Accolades: National Honor Society…Latin NLE Gold Medalist…Scholar-Athlete…School Ambassador…Team Captain…All-League selection.
Intended Major: Undeclared
Hobbies: Frisbee, Spikeball, playing super smash.
Favorite book: The Lord of the Flies
Parents: Christine and Craig
Coach’s comments: “We’ve gotten to know Mark pretty well at our two previous fall recruiting weekends. He’s an all-around awesome person, and his parents, Christine and Craig, are genuinely outstanding people. Mark is 6’2, 190 and has the potential to help us in a number of ways: he faces off, he has a huge shot and he plays defense with a chip on his shoulder. Above all else, Mark is a competitor who plays with tenacity, and we’re excited to have him join us.”

Attack, Bishop O’Dowd HS, CA
Accolades: National Merit Commendation…Team Captain…DVAL All-League selection.
Intended major: Economics
Hobbies: Basketball and golf.
Favorite book: Eragon by Christopher Paolini
Parents: Susan and Norman
Coach’s comments: “Trevor has extensive experience playing box lacrosse which is why he’s such a tough player around the crease and an accomplished inside finisher with a nice handle. Trevor will certainly be a reliable target and a welcome addition to the Bears.”

Attack, Aliso Niguel HS, CA
Accolades: National Honor Society…Scholar-Athlete…Team Captain…All-County selection.
Intended major: Architecture and Design
Hobbies: Basketball, Spikeball, hiking and going to the beach.
Favorite book: The Kite Runner
Parents: Mary and Bob.
Coach’s comments: “Jake has a natural feel for the game as a feeder and facilitator, as well as an off-ball player, which will lend itself well to our unselfish style of play. I’m excited to see how well Jake will fit into our offense.”

Defense, Friends School, Baltimore, MD
Accolades: National Merit Commended Scholar…Honor Roll (all eight semesters)…Team Captain…All-League selection.
Intended major: Undeclared.
Hobbies: Basketball, lifting, NHL hockey, coaching youth lacrosse.
Favorite book: Game of Thrones
Parents: Lisa and Brendan
Coach’s comments: “Finnian comes to us from Baltimore, Maryland where he was coached by Syracuse Hall of Famer, Tom Marecheck. At 6’3, 185, Finn is tall and rangy, able to cover a lot of ground quickly. He has a good stick, is excellent on groundballs and will help push the ball for us in transition.”

Midfield/ Faceoff Specialist, Sierra Heights HS, CA
Accolades: National Honor Society President…NSHSS…Cum Laude…Honors Society…Head of School List (all eight semesters)…Varsity Captain…2016 USL Academic All-American…2015 and 2016 League MVP/ Player of the Year.
Intended major: Undeclared
Hobbies: Lifting, football, snowboarding, watching movies.
Favorite book: No Country for Old Men
Parents: Galia and Don.
Coach’s comments: “It’s not often a faceoff man is voted League MVP. It’s even more impressive to earn the award twice, and the reason is simply because Jake is much more than a faceoff man. He’s built like a pit bull, he creates transition, he can stay on the field and play offense, and he has a cannon of a shot. Jake has the potential to make a big impact on our faceoff game and create momentum for us.”

Midfield, San Ramon Valley HS, CA / Diablo Valley College
Accolades: Junior College Honors Graduate…Disabled
Student Service note-taker…All-Academic Team honors…Team President and Captain…2014 and 2015 Junior College State Champion…California Junior College Lacrosse All-Star…2015 All-State selection.
Intended major: Admitted to Haas School of Business.
Hobbies: Basketball, fishing, mountain biking, community service and coaching youth lacrosse.
Favorite book: Zero to One by Peter Theil.
Parents: Donna and Richard.
Coach’s comments: “Cameron is one of the nicest people you’ll ever meet. He comes to us as a transfer from the recently successful Diablo Valley College program and played at San Ramon Valley for Peter Worstell. Cam is 6’3, 210, has long strides and plays fast but under control. He keeps his head up, sees the field and makes smart decisions with and without the ball. Cam should be a strong addition to our midfield corps.”

Midfield, Coronado HS, CA
Accolades: National Honor Society…Cymer Scholar…Varsity Captain.
Intended major: Physics
Hobbies: Skiing, fishing, hiking and lifting.
Favorite book: The Catcher in the Rye
Parents: Kim and Bill
Coach’s comments: “Tyler comes from an excellent high school program coached by Alex Cade, so he has an excellent understanding of all facets of the game. He is a firey, quick, shifty player who battles for groundballs and has good hands. Because he is so versatile- able to play offense and defense- we will figure out this fall where Tyler can best help the team.”