The Greater Los Angeles Chapter of US Lacrosse inducted four new members to its Hall of Fame on Monday, introducing the honorees before a packed room at The Mark in Los Angeles. Ryland Huyghue, Charlie Meister, Suzette Soboti and Tarik Ergin joined the 39 people previously inducted.

Keynote speaker Paul Carcaterra, an ESPN analyst and former Syracuse All-American, set the tone for the evening with a conversation about the community that surrounds the game. Carcaterra described relationships gained over the years that connected him to many in the room, illustrating the very few degrees of separation between members of the lacrosse family.

For more complete biographies on each inductee, check out the Greater LA US Lacrosse site. 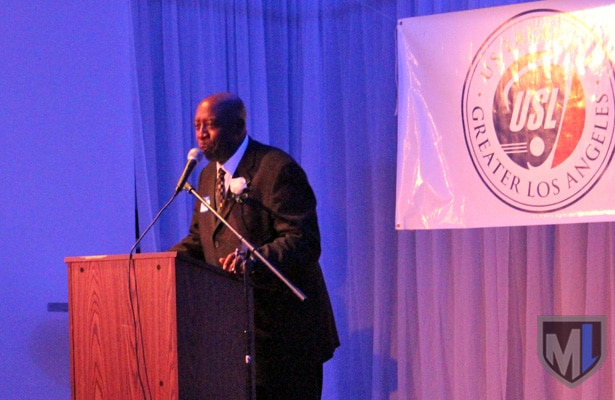 Ryland Hyughue
Since 1982, Ryland Huyghue has spearheaded the development of lacrosse in Southern California, from Orange County to Malibu. Over the years he has coached at seven different local colleges and four different high schools. Ryland Hyughue currently is coach at St. John Bosco and president of the Pacific Lacrosse League.

Charlie Meister
Co-founder of the LA Lacrosse League with Jake Steinfeld in 1999. The LALL was the first open enrollment youth lacrosse league for boys and girls in the history of Los Angeles County. Charlie currently serves as General Manager and assistant coach for the USC men’s club program.

Suzette Soboti
The head coach at University of Redlands since 1998, Soboti oversaw the team’s transition from club to varsity in 1999 and has led the Bulldogs to three conference titles and four NCAA Tournament berths. She also has served as a high school official in Los Angeles and Orange counties.

Tarik Ergin
True to form, Tarik Ergin coached his Oak Park team Monday afternoon, then went directly to the dinner, still in coaching gear. A player, official and coach since moving to the West Coast in 1991, Ergin has been head coach at Oak Park High School since 2010. Before that, he coached at both Pepperdine and NCAA Division III Whittier College, as well as becoming a key member of the West Coast Starz coaching staff. He also coaches the Elite A team for the LA Mavs club.