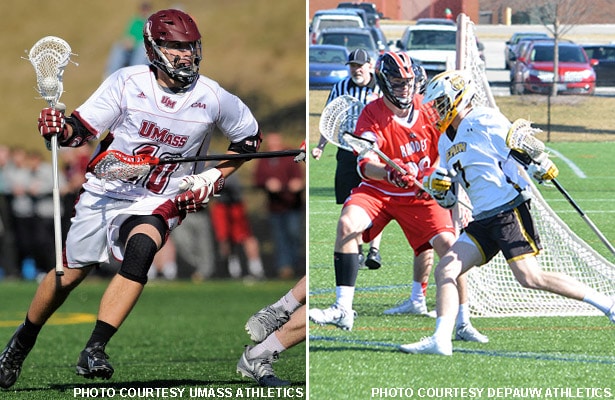 Junior attack Grant Consoletti (Oak Park ’12, pictured above left) had a goal and two assists Saturday, as host UMass broke open a 6-6 game to upset visiting No. 11-ranked Ohio State 16-9 and even its record at 1-1.

Elsewhere, freshman Matthew Dauw (Chaminade ’15, pictured above right) made his collegiate debut for NCAA D-III DePauw. See below for details.

In Amherst, Ohio State led 4-2 after the first quarter, but UMass forged a 6-4 lead before the Buckeyes (2-1) rallied to tie just before halftime. But Consoletti found middie Dan Muller for the go-ahead goal with two second left in the half. The Minutemen entered the fourth quarter with a 12-8 lead, and after Ohio State had cut the UMass lead to 12-9 with 10:52 to play, Consoletti scored unassisted at the 9:25 mark to restore a four-goal cushion.