Lions Bounce Back from Opener With Decisive Win 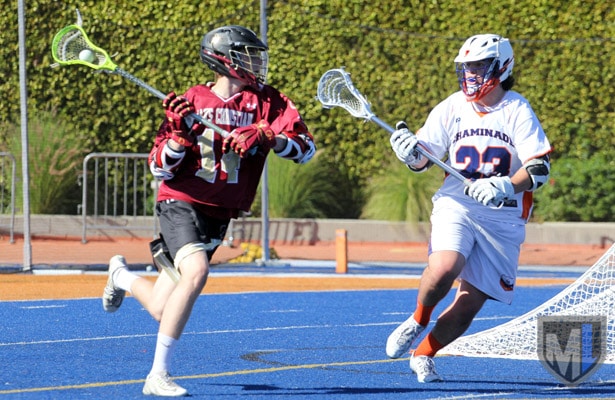 Oaks Christian had 11 days to think about its somewhat lackluster season-opening loss at Chaminade. When the Lions finally had the chance to take the field again, they issued an emphatic response, beating host Valencia 15-2. Oaks jumped on the Vikings for a 3-0 lead after one quarter and was up 9-2 at halftime.

Each of the Lions’ first seven goals was scored by a different player. Sophomore Seamus O’Brien (pictured against Chaminade) finally broke that streak with back-to-back goals to close out the first half, his second and third of the game. He would finish with five goals to lead Oaks Christian. He had two goals against Chaminade.

Oaks Christian (1-1) was scheduled to play at Sierra Canyon on Friday afternoon, but the game was postponed because of scheduling mix-up with the bus company bringing the Lions over from Westlake Village.

The Lions had opened the season at No. 13 in the coaches poll but dropped to No. 17 after their 10-6 opening loss, a game in which they trailed 8-1 midway through the third period. After beating Valencia, they were looking forward to proving that the performance against Chaminade was not an indication of how their season will play out.

Now, barring a quick rescheduling with Sierra Canyon, they’ll have to wait until Wednesday, when No. 8 Newbury Park (3-0) visits in the Marmonte League opener for both teams.

Valencia (1-2) had climbed into the rankings at No. 20 after beating Redondo Union to open the season but has now lost two in a row and is scheduled to face No. 5 Thousand Oaks on Friday night.