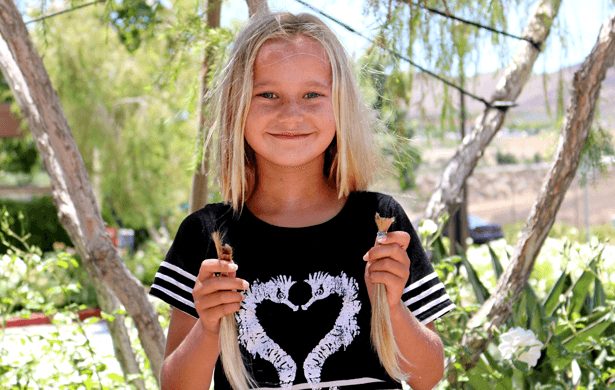 who have known each other, who have just met, and who have yet to commune over a shared passion for the sport they love.  This special “Lady-LAX-Love” was at Sanctuary Salon by Cha last Thursday afternoon.  It flowered beautifully, for an even more beautiful cause.

That ponytail you put through constant sun and sweat, occasional blood and tears, and your goggle bands for lacrosse is more than just a backside whip on the defender you roll dodge by.  It’s the frame of your face, the curtain that hides your shy smile, and the one, single body part that probably hasn’t suffered any serious injury because of lacrosse.  It’s also pretty annoying if your braid ever gets caught in your cradle, or your bun is too big to stuff in a goalie helmet.

Pantene Pro-V and Victory Lacrosse were aware of the hair struggles of a lacrosse girl.  Somehow, they knew some of us would like to lose a few hair pounds at a particularly lovely hair salon.  More importantly, Pantene and Victory remembered the girls who currently don’t know what it feels like to put a ribbon on a long fishtail, or comb out split ends.  While most of us have long, silky ponies that fan behind us when we run down that field, some girls–who may not even be able to play lacrosse– don’t.  That is why Victory Lacrosse hosted the Lax for Locks hair donation event, for Pantene Pro-V’s Beautiful Lengths program.

According to the website, Pantene’s Beautiful Lengths program, partnered with the American Cancer Society, is “the largest nonprofit health organization committed to saving lives from every cancer and improving the quality of life for people facing the disease. The role of Pantene is to help women grow long, strong, beautiful hair, and provide the funds to turn this hair into free, real-hair wigs for women with cancer. So far, Pantene has donated 24,000 free real-hair wigs to the American Cancer Society’s wig banks, which distribute wigs to cancer patients across the country.”

At Victory’s Lax for Locks hair drive, thirteen lacrosse girls donated to Beautiful Lengths.  Cancer patient hair recipients were nameless, not present to see us make the cut, but each donator seemed to have those recipients in mind and in heart.  The Victory “lady-LAX-love” was spread far beyond the little group at Sanctuary Salon that afternoon.  Each girl glowed and smiled as skillful salon owner (and former Laguna Hills JV Girls Lacrosse coach) Richard Cha happily went to work.

“It’s for a good cause and going to someone who deserves it,” said youth player Carly Tobias, “and it gets the word out about lacrosse.”  Carly and her mother, Terri, had driven to the San Clemente salon location all the way from Chino Hills.  Terri did not regret it.  “It’s helping the girls become well-rounded,” she said.

Ariana Petrikas, a San Clemente High School senior and Victory Lacrosse supporter said of donating her hair: “It feels really good to be lighter and give to a good cause.”  It was her third time donating hair for cancer patients.  Her mother, Gina, joined her.

The first to make the chop was not a lacrosse player, but a fearless LAX girl nonetheless.  Victory Lacrosse mom, Uki volunteered to cut her shoulder-blade-grazing mane before everyone else, spontaneously.  With the bright enthusiasm of a 11-year-old defender who just learned how to check, Uki stepped up to Cha’s shears and received a chin-length bob.

I was next.  Don’t let the “Before” picture with Richard Cha fool you.  I’m taller… I mean, my hair is longer… than it seems.  So long, that it has survived multiple sun/scalp burns, dewy 6am workouts, dodging whiplash, and attempted inside-out braids: a near decade of hard core lacrosse.  Before I knew it, the dependable length of dead skin cells was gone, and placed in a zip-loc bag to be sent to Beautiful Lengths.

“For a good cause,” I told myself after the first cut was made, leaving me wide-eyed and breathless. Not much consolation was needed for my loss however, because I had a supportive, positive sideline of players, coaches, and mothers to cheer me on.  Cha moved on down the line, combing through, pigtailing, and slicing through each girls’ hair.  He repeatedly commented on the fact that Victory’s turnout was the best he had had in one go.

Smiles were all around as the event went on. There were no tears at all. A grimace or two here and there, though, yes.  Cha gave each girl a professional hair cut, and the ladies had lunch.  Then, the meat of the event was delved into– not speaking of our turkey sandwiches.

The power of chit chat is underestimated in these parts, but with the women of Victory Lacrosse, conversation was rich and important.  It was not about unicorns and rainbows, or the Kardashians (although Cha gave me Kylie Jenner’s hair style).  It was about lacrosse:  Orange County, Los Angeles, and San Diego lacrosse.

The Tobias ladies from Chino Hills told us about how hard it is to find lacrosse opportunities in the Los Angeles area.  Carly attends this summer’s NOClacrosse camp, and makes a long drive to it every week, just to practice and play.  The Petrikas’s, fans of MaxLaxOC.com, were happy with, but would like more girls’ lacrosse coverage.  In general, the ladies celebrated the growth of lacrosse in Orange County.  Though we were all a bit envious of the already-established success and growth of San Diego lacrosse, we expressed faith and excitement that Orange County and Los Angeles would catch up.

With more quality players and enthusiasts like the ladies of Victory Lacrosse, girls’ lacrosse on the West coast will certainly grow to reach its full potential.  Already, Cali girls are making lacrosse milestones, such as competing in national tournaments, being recruited by Division I schools, and even winning national women’s championships.  Where there may be less hair (for now), the “lady-LAX-love” has more room to grow.