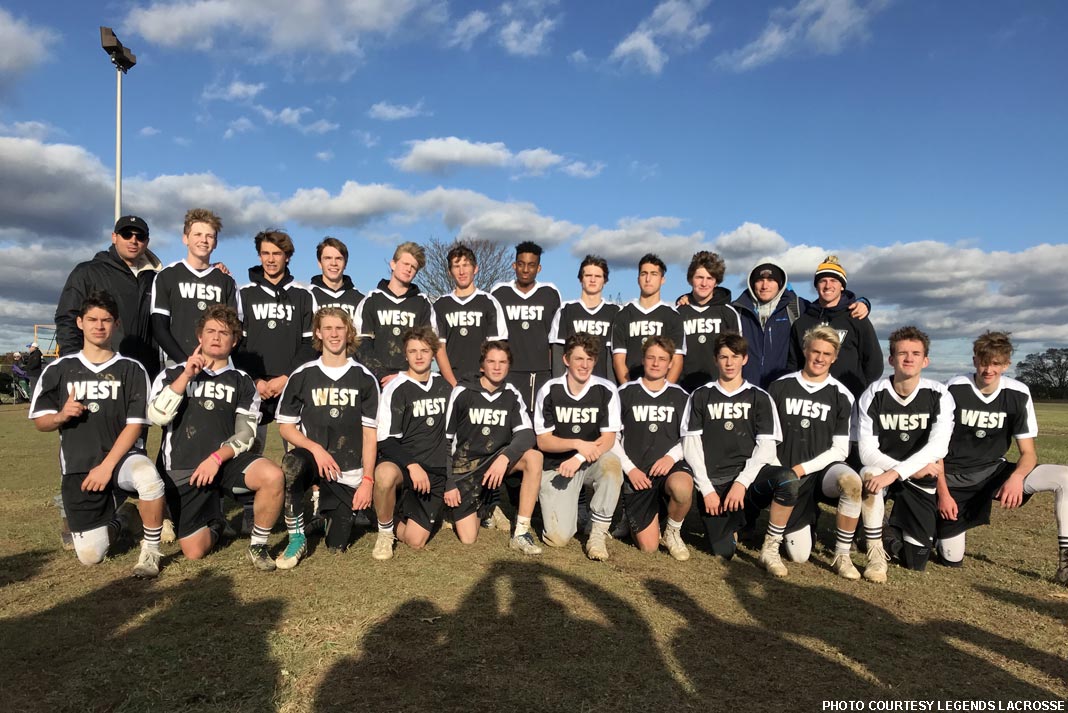 A squad of 22 freshmen from nine states, many of them from Southern California, playing under the Legends West banner, swept two three-game tournaments on Long Island, N.Y., earlier this month, going a combined in 6-0 in the Long Island Lacrosse Classic and the NLF Fall Elite Invitational.

Legends co-founder and president Rory Doucette described Denver Elite 2021 Silver as a well-coached and very skilled team that implemented a lot of box-lacrosse aspects into its offense. Doucette said Edge is Canada’s top field lacrosse program and described the squad as “tough as nails.” Legends fell behind 2-0 early but fought back for a 5-3 win on a sloppy field.

“Going into the game, we thought it would be great to see how we have progressed in only one day,” Doucette said via email. “The boys came ready; the score shows more lopsided than it really was. About 75 percent of the game was competitive.”

Legends West followed that with a stunning 5-4 win over Team 91 from Long Island, N.Y., which Doucette called “arguably the top club in the country.”

“Very skilled team,” he said, “complete at all positions. This game was a gut check for our guys. Nobody expected us to win except the kids in the Legends jerseys. Game was tight the entire time. Defense closed it out with strip of their best guy at the end. Huge win for the team; made many heads turn. Goalie Aidan Shah, a Portland, Oregon, native, made a few huge stops to keep it close in the beginning, or we would have been down a few.”

Legends West closed out the say with another close one, beating Mesa Fresh 2021 (Philadelphia) 5-4. “Great game,” Doucette said. “We were down to start, but our guys toughed it out. Came back, took the lead and held on in a game that was not pretty, but it was good lacrosse.”

Doucette highlighted a number of individual standouts from the Legends West squad on the weekend:

Attack
The group of Eric Spanos (PA), Chop Gallagher (OR) and Trae Ika (UT) looked like a well oiled machine. All were able to dodge, and a sense of unselfishness was found immediately. Chop had two four-goal games, and Spanos racked up a ton of goals. Ika was initiating and helping run the whole offense.

Midfield
A group of good athletes who were able to play well on both sides of the ball. Ed Shean (Seal Beach) had a huge goal and assist vs. Team 91 at a critical time in the game to put us up for good. Aris Brown (Sierra Canyon) had some critical plays on man-down to help the defense secure two victories.

Face-off
Lake Baker (NV) is the best in the country for his year, in my opinion. Having him prevented anyone from going on a run against us and allowed our offense more time to work together and mesh. Lake took on the Team 91 FOGO, both ranked top 5 in country, and won the majority of the possessions.

LSM
Conor Spagnolli (TX) was a beast on defense and in transition, as well. Contributing on the scoreboard with some goals and assists but also using some high lax IQ to help set others up in transition. I don’t think I saw one player run past him in any one-on-one setting. Long, rangy athlete with a ton of skill.

Defense
The defensive group was outstanding together. Tyler Blackburn (La Jolla) was one of our top cover guys, a strong athlete with a toughness to him, rarely finds himself in trouble. Caleb Plankers (MN) was a physical presence, making opposing players thing twice about driving towards the cage.

Goalies
These two were both great. Lewis Schrock (WA) and Aidan Shah (OR) both had moments of brilliance when we needed them. Both were very vocal, and they were a big help in our defense playing well as a group (most of these kids met each other on Friday, so there is no chemistry to start with). Very dependable keepers, both were able to push the ball in transition as well.