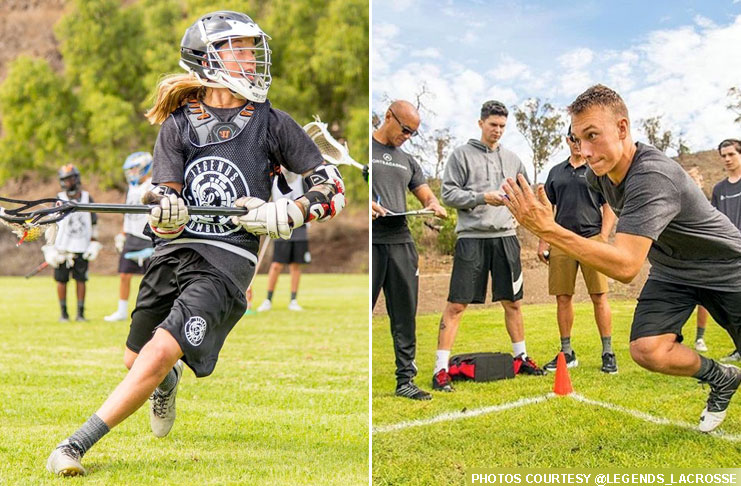 Last month, Legends Lacrosse invited coaches from some of the top NCAA Division I lacrosse programs in the country for a three-day combine held at the Sports Academy in Thousand Oaks.

Next month, Legends will do it again, offering a three-day Academic Aces combine featuring coaches from elite academic institutions such as Harvard, Dartmouth, Cornell and Brown, along with Tufts, Babson and Boston University.

The combines are the first programs offered by Legends Lacrosse, an organization founded by longtime L.A. lacrosse backer Scott Hochstadt. A 2014 inductee to the Greater Los Angeles Chapter, US Lacrosse Hall of Fame, Hochstadt founded both the Starz Lacrosse and Adrenaline organizations and has continued coaching in the area since selling his ownership of Adrenaline.

With Legends Lacrosse, Hochstadt said he hopes to create opportunities for kids who aspire to play at the highest levels of the sport. “We’re not going to be like traditional clubs, running local teams and leagues,” Hochstadt said. “We’re here to support local clubs, not compete with them.”

Four age-group teams traveled to Maryland last weekend for the Terrapin Classic and played under the name Legends West, but Hochstadt said his new venture is much more about the experience than about forming club teams to compete in tournaments. “We’ll do one trip in the fall and one in the summer to reward local kids,” he said. “It’s not a Legends Club but a Legends Experience.”

That experience starts with the series of combines that began last month and continues with the Academic Aces on Dec. 9-11 and a Committed Combine on Jan. 27-29. The events are held at the Sports Academy in Thousand Oaks, which is run by Chad Faulkner, who also is a partner in Legends Lacrosse. Former Adrenaline events manager Rory Doucette recently joined Legends as president.

Hochstadt and Doucette answered a few questions for MaxLax to help introduce Legends Lacrosse and the combine series:

You’re one of the founding fathers of SoCal lax, but Legends Lacrosse is relatively new. How did it come about and what are its goals?

A: Legends is a result of a continued passion to help student athletes and grow the game of lacrosse, along with new opportunities to help us accomplish our mission. Legends will continue to provide first-in-class service, which myself and our team has strived to do for many years. Through our networks and relationships across the country we plan on continuing to build on the momentum of the wave of Western lacrosse and push ahead into new programs, concepts and partnerships.

What other coaches are involved with Legends Lacrosse?

A: The Legends West coaching staff this past week included:

We have some big names joining our staff this summer.

Can you describe the combines you’re running and how they might be different from a typical camp or clinic?

A: Our combines are helping us push the envelope in the lacrosse recruiting and training world. On one hand, the NCAA coaches we employ bring a wealth of experience, knowledge and, most importantly, a desire to teach and interact with our players. On the other hand, our Legends Sports Academy facility, is one of a kind and allows us access to some of the most cutting-edge technology and training programs. Together, with the network of club and high school coaches supporting us in the West, these combines will provide for a whole new experience for the high school lacrosse player.

What kind of players should consider attending one of the combines?

A: These combines are not for new or inexperienced players. Rather, the top-flight level of physical and mental training we will focus on will be catered to the advanced athlete and lacrosse player. These combines are not only for polished players, but for student athletes looking to take their game to the next level and experience a variety of non-traditional aspects of lacrosse “showcase” offerings, along with first-class coaching.

Rarely do you see offerings where a combination of learning and recruiting can be found in one setting, but we will be able to offer both sides of that. Some combines (i.e. Academic Aces, Committed Academy) will be looking for players who meet the themes, while others will be wide open for anyone who wants to be a part of it.

And beyond lacrosse and recruiting, our combines also will incorporate sessions with our sports psychologists and Navy Seal instructors, as well as exposure to our cryo chambers and biotech lab to challenge the athletes mentally and physically. Our Sports Academy hosts some of the top NBA, NFL, AVP and Olympic athletes in the U.S. Legends owners include two-time NBA MVP Steve Nash, UCLA head football coach Jim Mora and Scott Hochstadt. Rory Doucette is the President of Legends Lacrosse.

How did the Legends West squads do at the Terrapin Classic last weekend?

A: Just to be clear, Legends West isn’t a new club team. This is more of an experience where we reward the best players from all the local club teams and support the local club directors.