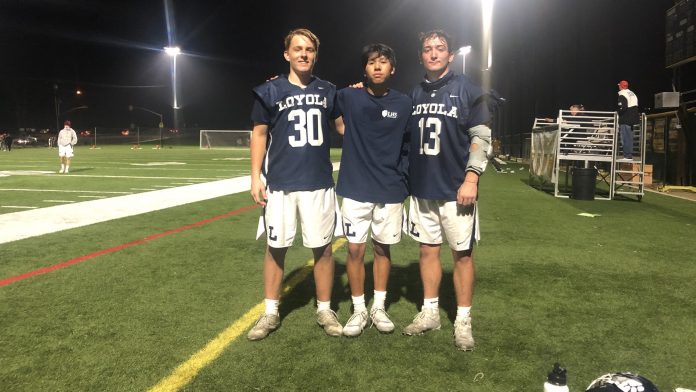 The Loyola boys lacrosse team capped off its impressive week, as it knocked off Foothill 7-5 on Saturday at Foothill High School.

Aidan Lee (pictured middle) led the Cubs with four goals while Owen Gaffney (pictured right) added two goals. Matteo Silvestri also found the back of the net once for Loyola. Henry Link (pictured left) had 12 saves for the Cubs.

“We just kept fighting. It wasn’t our best three quarters, but we never gave up and we were able to finish a couple [of goals] on that fourth quarter and get a couple of stops. It wasn’t pretty, but we’ll take it. A win’s a win,” Cubs coach Jimmy Borell said.

Casey Copeland and Jackson Hines each scored twice for the Knights while Bode Jellerson added one goal. Joey Garcia made 12 saves for Foothill.

The game began intense, as both teams made big plays defensively and attempted to jar the ball loose. After the Knights scored the first goal of the game courtesy of Hines, the next two goals belonged to the Cubs. Lee scored the equalizer at the 6:37 mark and Gaffney scored at the 2:35 mark to give Loyola a 2-1 lead as Q1 ended.

A goal from Lee near the halfway point of the second quarter gave Loyola a 3-1 lead that held up until the closing seconds of the half. Foothill seemed to grab the momentum with about 25 seconds left when Hines scored off of a quick pass from Easton Babb cutting the Loyola lead down to 3-2. Lee would have none of it though and he made his hat trick official about three seconds remaining in the half to give the Cubs a 4-2 lead.

“It’s amazing having Joey in the cage, he’s a great leader, he plays his angles well, he gets everyone fired up and he just makes the game really fun when he’s back there,” Knights coach Jon Fox said.

Foothill’s defense clamped down even harder in the third quarter allowing the Knights to make it a one-goal game at 4-3. But Lee was not done pulling last second tricks out of his sleeve. This time Lee scored off of a diving attempt to the goal with less than a second remaining, giving his team a 5-3 lead.

Silvestri gave Loyola it’s biggest lead of the game at 6-3 and it looked as if that cushion of a lead was going to be enough. But Foothill was far from done, as a man-up goal from Jellerson cut the lead down to 6-4 at the 6:41 mark.

A little over a minute later, the Knights got another man-up goal from Copeland which cut the lead down to 6-5. Foothill almost tied the game shortly after, but the ball hit the top of the crossbar and the Cubs were eventually able to get the ball and get back to even strength.

“We just didn’t shoot that well, we didn’t put the ball in the cage,” Fox said.

With 2:19 remaining, Gaffney gave Loyola a little bit more breathing room, giving his team a 7-5 lead. The Cubs’ defense took care of business the rest of the way to secure Loyola’s fourth win of the season.

“They played an outstanding game. Coach Fox is a class act, he’s been doing great for a long time, they were outstanding. We had trouble against their ride, trouble getting past their goalie, so my hat’s off to them,” Borell said.

Despite the loss, Fox was proud of the way his team played, primarily against a zone defense for the first time this season. He also gave credit to Henry Perkins, who impressed at the faceoff position.

“The defense balled out against an athletic bunch. It was just a good battle back and forth, we just didn’t have the horses tonight,” Fox said.

Next up for Loyola (4-1), a big Mission League game against Harvard Westlake on Tuesday at 3 p.m. For Foothill (4-1), it has another big matchup against nationally ranked Torrey Pines on Saturday at 7 p.m.