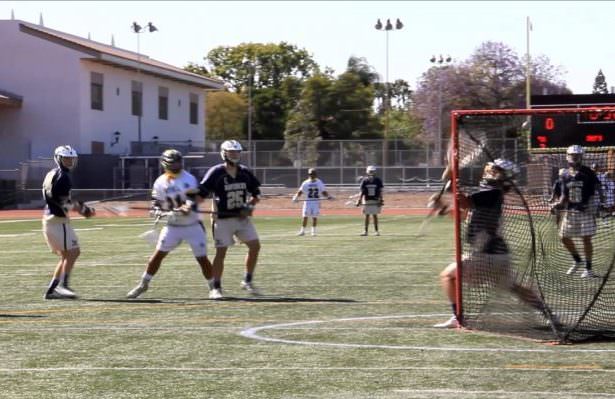 The red hot La Costa Canyon Mavericks travelled to Orange County to play Foothill on Saturd. The Knights, ranked no. 2 in the Orange County coaches poll are one of the teams that Mavericks have displaced in their climb No. 4 in the West. Then annual match up usually goes down to the wire and this year was no different. Down 6-2 in the first half, the Mavs fought back to claim an 11-9 lead with less than two minutes play, but could not hold on. Foothill’s Jared Copeland intercepted a pass in the first overtime and started a transition that ended with Kevin Kodzis popping the game winner.

Matt Harris got the scoring going one minute in when he got underneath his defender on a roll back and stuck it off hip for the goal. Cole Falbo scored next for the Knights on a nasty hitch move to get his hands free from 6 yards and buried it. La Costa got on the board Garrett Deleon fed Conner Rafferty for a bounce shot inside. Foothill fired back when Ryan Foy scored off a Kevin Kodzis assist. They followed that up a minute later when Cole Falbo scored off an Ellis Geis feed coming out of a Foothill timeout. End of 1Q 4-1 Foothill.

The Maverick started to claw back when Andrew Beacham scored off a feed from Jake MacLean, but  deeman Tanner Boston got it right back for Foothill when he created transition on the ride and took it right to the cage off a groundball and scored from 10 yards out. Next up was Nathan Skeen for the Knights getting a pass from Chris Reem, setting his feet from 12 yards and throwing heat by the goalie.  At 6-2 Knights it looked like it might be blow out city, put the Mavs got two quick ones to make it 6-4 at the half. Rafferty scored man up from McClean and Deleon scored the other.

Rafferty rode the momentum into the second half, taking jus nine seconds to make it a one-goal game at 6-5.  Then Ellis Geis got doubled, took checks and got underneath both defenders for a man-sized goal and a 7-5 Knights lead.  LaCosta fired right back when long pole Dan Verga scored in transition. Harris scored again for Foothill on a rip just inside the pipe off a cross crease look from Skeen. La Costa would simply not go away,  Deleon got topside and buried one inside the pipe to make it 8-7 FH. Foothill got one more in the 3rd when Geis hit Kodzis unsettled with 10 seconds to go. 9-7 end of 3Q Knights.

In the fourth quarter, the Mavs who last week scored six unanswered second half goals to take down Torrey Pines,  went on another run.  Jack Keen put back a rebound. Deleon scored another and Keen got topside and hit the corner to make it 10-9 LCC , and just like that LCC had their first lead of the day.  Foothill pulled the goalie next possession and Andrew Beacham made them pay and upped the lead to 11-9 Mavs.   With the game all but over, Foy put away a pass from Skeen to give Foothill a second life. With 30 seconds to go La Costa had the ball killing clock and the Knights where able to get it back and call time out with 22 seconds. Out of the time out Geis was doubled with the ball, rolled back and hit Steve Oberly who fired it home…11-11! OT…

In OT La costa had possession but Copeland  intercepted a pass with his long pole , fired up field to a streaking Nathan Knight, who fed Kodzis who faked twice and fire a bullet off-stick side for the victory.