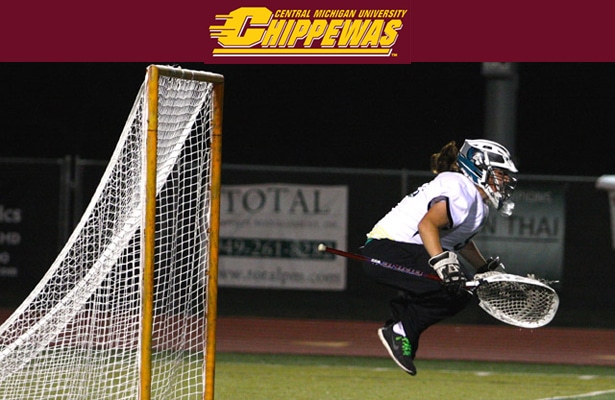 Wearing jersey number filthy fifty for the past 2014 season, goalie Clare Laughery was an impact player for the Wolverines of Aliso Niguel Girls’ Lacrosse.  She will graduate in 2015 and is now committed to play Division I lacrosse at Central Michigan University.

Laughery was reported as “a terrific anchor for the Lady Wolverines lacrosse team” after being named MaxLaxOC.com’s Player of the Week last March.  MaxLaxOC reported on her again when she braved East coast competition with the WDNT team the following summer.  Laughery has also played with Xteam and has been named a Brine National High School All-American twice.   As big fans of Laughery, we are proud to report on her accomplishments yet again.

OFFICIALLY COMMITTED TO PLAY D1 LACROSSE AT CENTRAL MICHIGAN. THANKS TO ALL THE HOMIES WHO HAVE HELPED ME SO MUCH. pic.twitter.com/8VvIErIlWO

Central Michigan University Women’s Lacrosse is a new addition to the Atlantic Sun Conference of NCAA Division I athletics.  The team was previously a club based of walk-on players.  They’ve climbed the ranks of WCLL divisions to reach a peak that Laughery now has the honor to debut in.  The team just announced its first Women’s Lacrosse coach, Sara Tisdale, who Laughery will continue her lacrosse career under.  Her high school coach, Dave Elkins told MaxLaxOC about the kind of player Tisdale will have the pleasure to coach:

“I’m very proud of all the hard work Clare has done to find the right fit for her.  I think Clare has worked hard to grow as a player and a teammate this past year, and I know that she will bring that experience and mindset to Central Michigan’s new program and hopefully become a cornerstone for the team to build upon.  I always tell my girls to find a college that is a fit for them first and foremost, and I think that Clare has taken that message to heart and finally found a place that she will be proud and happy to call home for the next few years and we’re all very excited for her and for all of our players who’ve taken hold of their future and done the work to find a special place to continue both their education and their playing careers.”

Laughery’s past junior season was a standout performance in all.  She made 103 saves total, with 19 of them made early in the season against two quarterfinal ranked teams.  Laughery is not only a beastly Wolverine in goal.  She’s quite a character in person.  Humor and fun compliment and drive every second of lacrosse Laughery plays.  “Get out me car!” and fake accents are just two examples of the hilarity you hear from Laughery on field, in addition to solid defensive direction.

As she finishes out the last season of high school lacrosse, her supporters and fans will enjoy her personality and skill.  When she moves on to Division I lacrosse, her new Central Michigan Chippewa family will too.