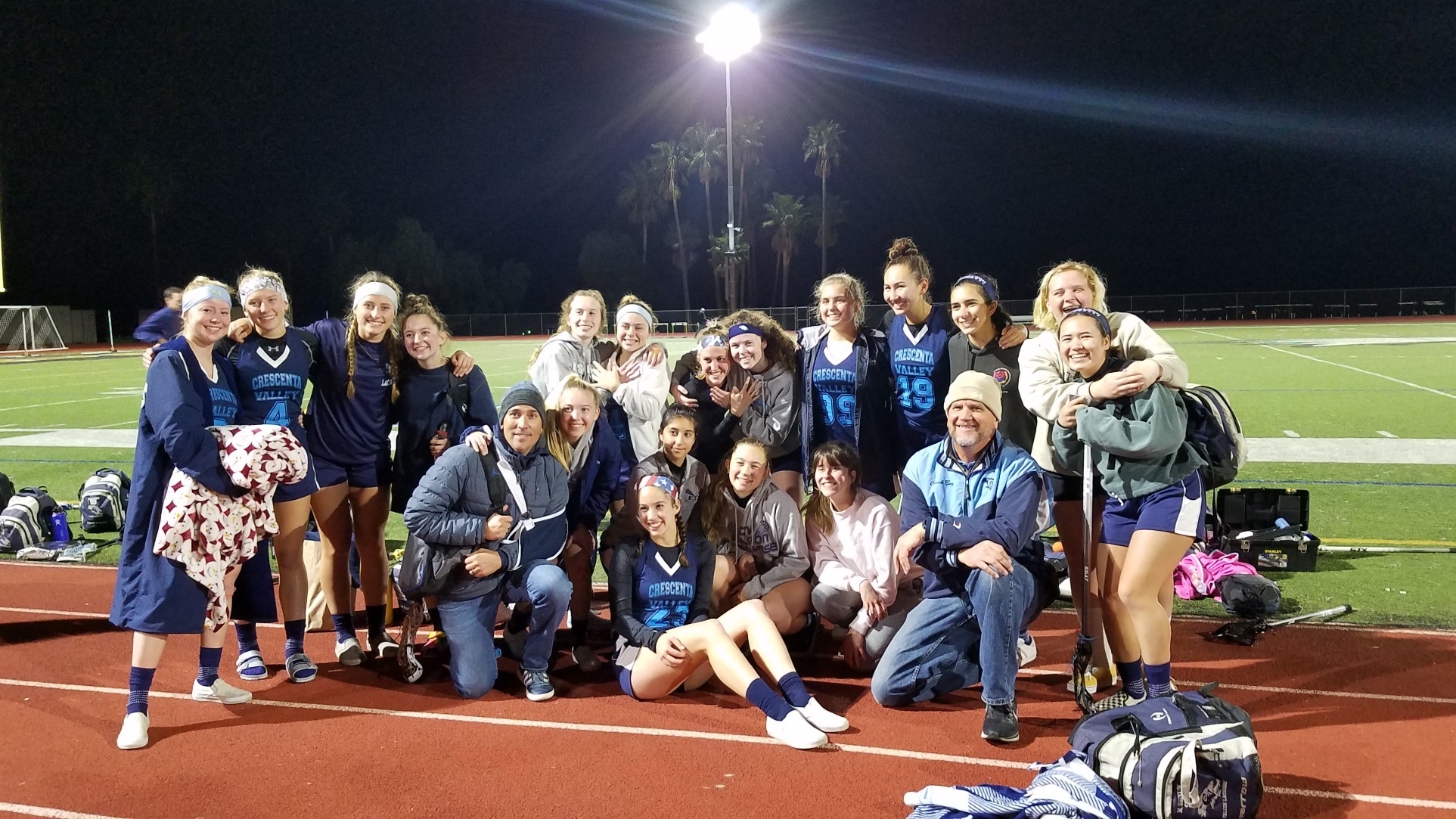 “This was a huge win for us,” said CV Head Coach Boz Crowther after the game. “The only other time we’ve played them was last year at our field and we did not show ourselves well. They have four years on us as a team, so have always been one that we look up to.”

CV took early control of the game with a score off the opening draw by senior Peyton Marshall 12 seconds in. The Falcons then scored five of the next seven goals to extend their lead to 6-2 with eight minutes remaining in the half.

“That sequence was really good for us,” commented first-year CV Assistant Coach and Offensive Coordinator Brent Ballard. “Oak Park came out in a super-fast, high-pressure zone backer defense that really made our girls work. Being able to not only weather that storm but come out on top of it was a great confidence booster for our entire team.”

The Eagles would not go quietly, however, running off four straight goals to end the half, including 3 in the last 2 minutes. At halftime, the game was knotted at 6.

Oak Park opened the second half with two quick goals from Madison Suwara to lead 8-6 with 23:20 to play, and appeared to be about to run away with the game, but the Falcons held firm and answered with their own pair to tie it up at 8. The teams traded off the next four scores and the game was tied at 10 with 7:27 to play.

CV senior captain Lexi Ballard then notched goals at 6:28 and 4:39, the second off an assists from fellow senior captain Peyton Lindman-Marshall, and the Falcons led 12-10.

The Eagles won the ensuing draw and appeared to be poised to close the gap when Graesen Campbell was awarded a free-position shot.  Falcon sophomore goalie Phoebe Crowther denied Campbell,and freshman midfielder Kaisa Lindman-Marshall scooped up the rebound to give CV possession.

After a couple of whistles on Oak Park’s re-defend attempt, Lindman-Marshall got the ball to senior captain defender Audrey White who carried the ball goal-line to goal-line and scored the final goal with 2:38 remaining.

“That was the play of the game,” said Coach Crowther. “If Graesen scores that goal OP is only down 1 and has momentum, but the save on the 8-meter plus the coast-to-coast run to put us up 3, you could see how it deflated them.”

Junior defender Maya Sheklow controlled the final draw to Ballard and the Falcons ran out nearly all of the remainining two and a half minutes. A last-gasp takeaway and long-distance shot by Oak Park’s Erin Dotson was stopped by Crowther and the final horn sounded.

Oak Park was paced by hat tricks from Suwara and Kathleen Dryden. Campbell scored twice and  Erin Dotson and Olivia Fagnani each added a goal for the Eagles.