Late Rally By No. 3 Westlake Stuns No. 5 Agoura in OT 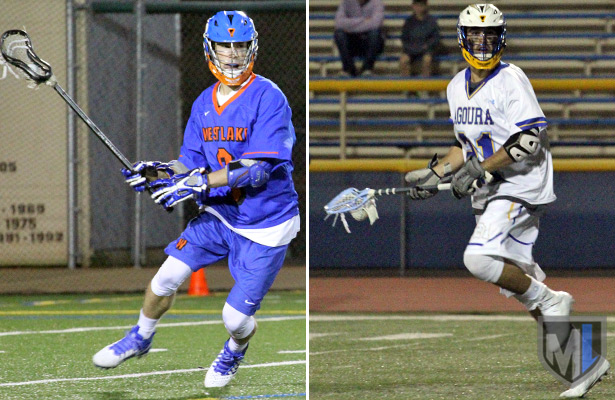 Senior middie Joseph Brandolino (left) scored all three of his goals in the fourth quarter Wednesday, helping visiting No. 3 Westlake erase a five-goal deficit and take No. 5 Agoura to overtime, where sophomore Duke Cohen scored on a feed from Brett Reilly less than 30 seconds into the extra period for a dramatic 12-11 Marmonte League victory.

It actually was the second comeback of the night for the Warriors, who trailed 5-1 late in the second quarter and 5-2 at halftime. But Cohen, Philip Bliss and Grant Barclay scored in the first five minutes of the third period to forge a 5-5 tie.

The host Chargers responded, though, rattling off five more goals in a six-minute span to lead 10-5 entering the fourth quarter.

Then it was Westlake’s turn — again — in this back-and-forth affair. Goals by Spencer Tyoran, Brandolino twice, Jacob Mannisto, Barclay and Brandolino a third time put the Warriors in front 11-10 with 2:02 to play.

Agoura’s Marty Shargel, who led all scorers in the game with five goals, scored unassisted with 1:08 left to force the overtime.

Agoura won possession to open the extra period, but goalie Matt Kilkeary made his 11th save of the game and started a fast break that ended with Cohen’s game-winner.

Cohen and Brandolino each scored three goals for the Warriors (4-1, 1-0), and Cohen also had an assist. Tyoran (2g, 1a), Barclay (2g, 1a), Mannisto (1g) and Bliss (1g) rounded out the Westlake scoring. Reilly finished with three assists.

It was the second overtime loss to a Top-5 team for the Chargers, who fell in triple overtime at Harvard Westlake on March 5. The Chargers played without senior attack Bar in that game, however.

Information provided by Westlake Lacrosse and @vcspreps on Twitter.