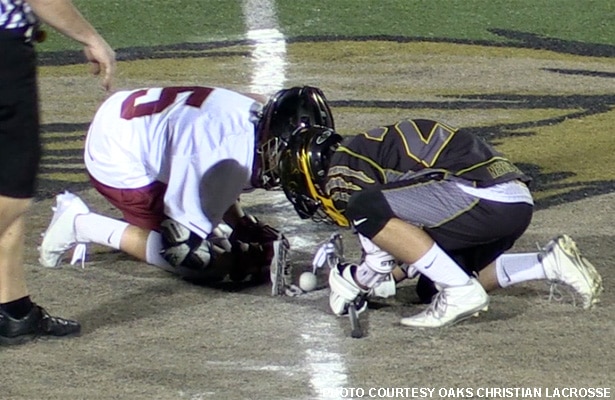 No. 7 Newbury Park trailed 4-2 entering the fourth quarter at No. 16 Oaks Christian on Wednesday night, but the Panthers rallied to send the game to overtime, then won it 5-4 when sophomore Billy Segal scored out of a loose-ball scrum in front of the goal.

The Panthers’ offense was held scoreless in the first half by a strong OC defense and the play of goalie James Vils, but Newbury found the net three times in the game’s final 13 minutes.

Senior Evan Phillips and freshman Carson Campbell scored to give the Lions a 2-0 lead in the first half. In the third quarter, junior Lorenzo Santor (1g, 1a) and sophomore Cort Rogers (1g, 2a) scored to extend the Lions’ lead.

But Panthers’ goalie Spencer Cabello, who finished with 13 saves, shut the Lions down in the fourth quarter, enabling Newbury to rally.

Information provided by OC Lacrosse and take from reports by @vcspreps on Twitter.