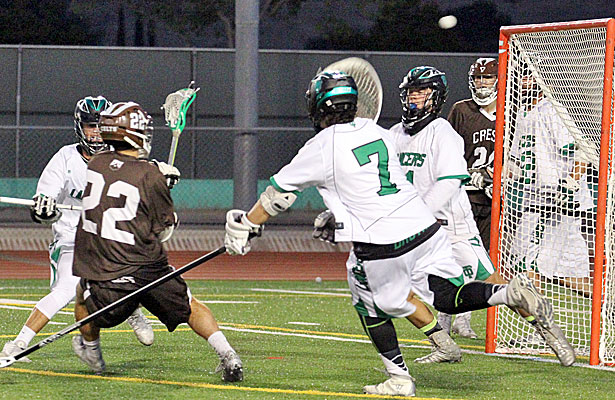 For the second playoff game in row, the Crespi Celts came from behind in the final minutes to claim a thrilling road victory and advance to play (at least) one more game.

No. 7-seed Crespi beat No. 6 Thousand Oaks 14-13 when senior Cam Radenberg — with coach Brock Livingston screaming at his team to hold for one shot — instead burst up the left side of the goal from X and buried what proved to be the game-winner with 1:21 to play. Alex Dixon won the ensuing face for the Celts, who ran out the clock.

The win brought to a sudden end a back-and-forth affair in which the teams were tied seven times, exchanged leads seven times and neither team ever led by more than two. It comes on the heels of Thursday’s stunning semifinal victory at No. 2 Loyola, in which the Celts overcame an 8-6 deficit in the final six minutes to force overtime.

The win also propelled Crespi (13-6), making its third consecutive semifinal appearance, into the L.A. championship game for the first time in program history. Crespi will face defending L.A. champ and No. 1-seed Palos Verdes, which beat No. 5 Westlake 9-5 Saturday, on Wednesday at Culver City HS (7 p.m.). The winner of that game advances to play the Orange County champion on Saturday, May 16, at Mira Costa HS.

For most of Saturday night’s semifinal, it appeared Thousand Oaks (14-5) might be the team playing Wednesday. The Lancers played lights out from the start, scoring almost at will and dominating possession for long stretches. And when they extended their lead to 13-11 on Zach Byington’s sixth goal of the game with 9:25 to play, they appeared to be in control.

Faceoff middie Matthew Parham was winning possession for the Lancers, and their ride denied Crespi possessions after two fourth-quarter defensive stops. Crespi was on defense for most of the first seven minutes of the fourth quarter.

Then it all changed. Crespi’s Dixon triggered a fast break that Sean Friedman finished on an assist from Jack Doyle with about 3:30 to play, and the Celts were back.

About a minute after Friedman’s goal, Crespi came out of a timeout with 2:37 to play and trailing 13-12, and Radenberg quickly found a cutting Dixon to tie it at 13-13. After the Celts won the ensuing faceoff and missed a shot, Thousand Oaks called time out with 2:01 to play. The Lancers had given up back-to-back goals and hadn’t scored themselves in more than seven minutes.

When play resumed, Crespi looked for an opening to try to take the lead. When none presented itself, Coach Livingston wanted to hold for one shot. The offense relaxed, and perhaps the T.O. defense did, as well. Radenberg jogged toward X with the ball but saw daylight along the left side of the goal. The speedy attack exploded up the left side and pulled his shot past Lancers goalie C.J. Ortiz. Crespi had its first lead since the 8:38 mark of the third quarter.

The Celts managed to gain possession again on the faceoff and ran out the clock, ending one of the best lacrosse games of this season and perhaps any in L.A. in recent memory.

Dixon led Crespi with six goals — giving him 19 in three playoff victories over the past week. Friedman scored three goals, and Radenberg and Doyle had two each. Seth Park scored one for the Celts.

Byington’s six goals led Thousand Oaks, which also got four from sophomore Zac Asbury, two from Nick Auger and one from Roy Ward.

The loss ended a stellar season for the Lancers, who two years ago lost in the first round to Crespi and last year lost in the second round to Palos Verdes.