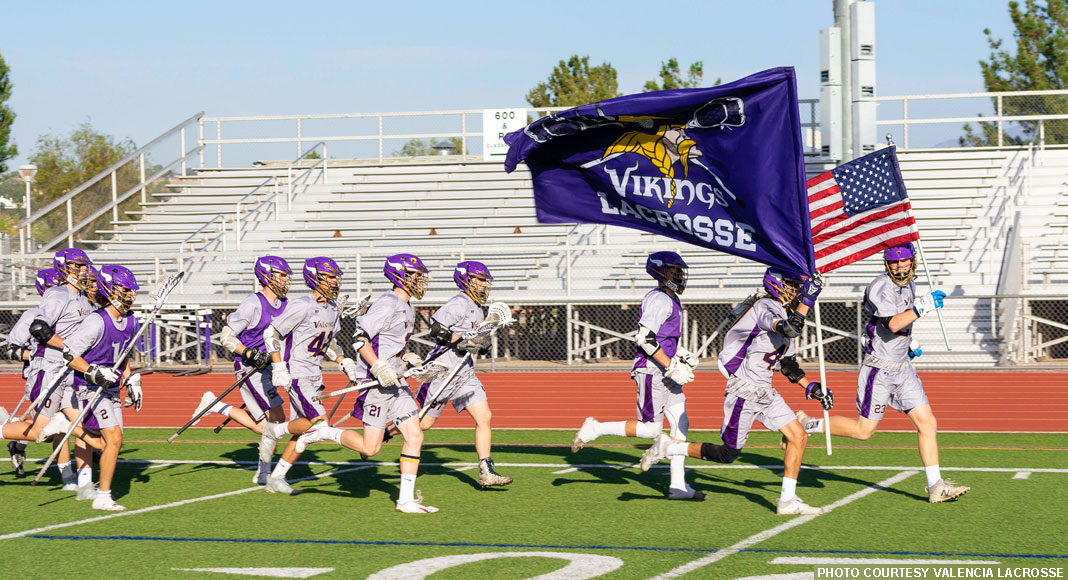 Sophomore attack Adam Coley scored his third goal with less than a minute remaining Wednesday, lifting No. 20 Valencia to a 6-5 upset of No. 14 St. John Bosco. The Braves had trailed 5-1 at halftime but came back to tie the game 5-5 with 56 seconds to play.

The the Vikings (7-6) even had a chance for the late goal was remarkable enough, as Bosco face-off middie Mitchell Myers had won 10 of 12 draws to that point. But Valencia’s Joshua Vizcarra managed to win one when it counted, with the ground ball winding up in the stick of Vikings wing Preston Trujillo, who fed Coley on the break for what proved to be the game-winner.

Even with only 48 seconds on the clock, though, this one was far from over, Valencia coach Mark Bell said in an email.

Myers won the ensuing face-off, and Bosco called time out, but a turnover gave it right back to Valencia. During the clear, however, Valencia goalie Lucas Probst lost the ball out near midfield, and Bosco picked it up and fired from long distance. The shot was off cage, but the Vikings were called for a penalty because a defender jumped into the crease to act as goalie — a player-safety violation in high school lacrosse.

Fortunately for the Vikings, they survived the 30-second penalty and secured the win.

“A too-close-for-comfort game, to say the least,” Bell said via email. “Bosco did not let up and fought back hard for the entire 24 minutes of the second half.”

The first half, though, belonged to the Vikings and goalie Probst. He finished with 11 saves in the game, and Valencia limited Bosco to one goal through the game’s first 34 minutes. Coley scored twice in the first half, and Garrett Hixon, Noah Swigart and Cody McGraw each scored one.

After Coley’s second goal made it 5-1 in the closing seconds of the first half, though, the offense went silent for the next 24 minutes. Bosco, meanwhile, began chipping away. Myers scored with 2:13 left in the third quarter to make it 5-2, and freshman Sean Park scored early in the fourth to make it 5-3. Myers scored his second at the 6:54 mark, pulling the Braves within one.

Junior Isaiah Dolphin finally pulled Bosco even with 56 seconds to play, setting the stage for Coley’s heroics and the chaotic final 45 seconds.

Bosco (7-3) beat both Santa Monica and St. Francis in Week 1, when both opponents were ranked in the Top 20, and also has a win over Village Christian, which later moved into the Top 20 and is now No. 17. The Braves face one more ranked opponent in No. 19 West Ranch (April 20) as they look to build a case for a playoff berth.