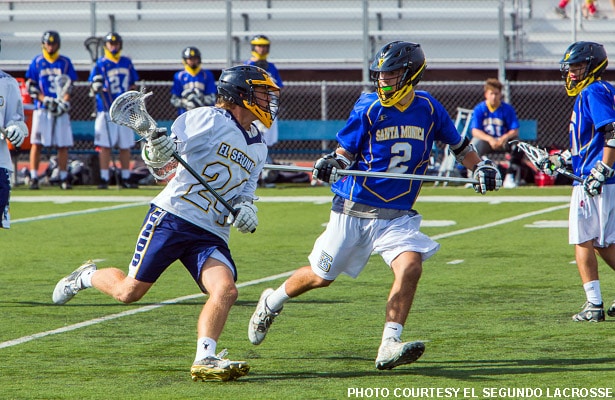 El Segundo senior attack Preston Quashnick scored the game-winning goal after Cory Lund forced a turnover on a Santa Monica clear with 30 seconds to play Tuesday, lifting the Eagles to a 15-14, come-from-behind victory in an Ocean League game.

Both teams had their opportunities in the final minute and a half. El Segundo defender Drew Bonney disrupted a Santa Monica breakaway with an interception. On the Eagles’ ensuing possession, Vikings goalie Elias Sandoval turned away a shot and started the clear that resulted in Lund’s caused turnover and Quashnick’s quick goal.

In a wild final 30 seconds, Santa Monica won the faceoff after Quashnick’s goal but was not able to touch it up in the offensive zone, resulting in a turnover. The Eagles promptly gave it right back with a turnover, giving the Vikings one more chance, but Eagles middie Daniel Ball picked off a pass and ran out the clock.

The Eagles on their seventh consecutive game after a brief losing streak early in the season. Santa Monica has now lost consecutive one-goal games to league opponents Culver City and El Segundo.