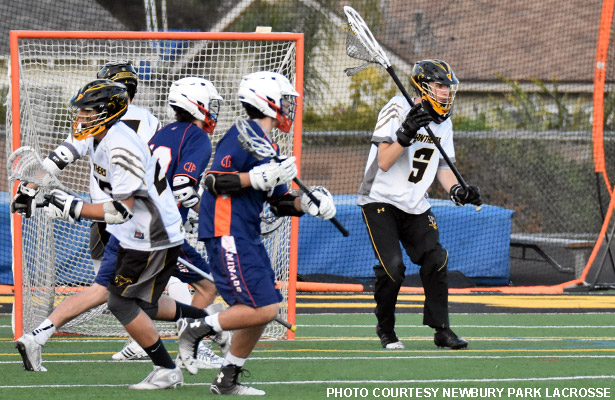 No. 11 Chaminade produced a three-goal burst to open the fourth quarter Tuesday, rallying past host No. 6 Newbury Park and holding on for an 8-7 first-round playoff victory, the Eagles’ first playoff win since 2008. They made the playoffs in 2010 and last year but lost in the first round.

Chaminade (11-7) advances to a Thursday second-round game at Mission League rival Harvard Westlake, which beat West Ranch 14-1 in its first-round game. The Eagles and Wolverines split their games in the regular season, with each winning at home.

Cabello’s work enabled the Panthers to overcome the face-off disparity and switch the field, and the result was a 2-1 lead after one quarter and a 3-1 lead early in the second. Chaminade tied it 3-3 heading into halftime, and it was tied again 4-4 midway through the third quarter before Newbury moved in front 5-4 heading into the final period.

That’s when Chaminade erupted, scoring three unanswered goals in the first two minutes to take a 7-5 lead with 10:12 to play.

The Panthers wouldn’t go away, though. Senior middie Jack Jensen scored two of his three goals in the final four minutes — the last one making it 8-7 with 2:14 left — as Newbury tried to rally. But Chaminade held on.

The win snaps a three-game losing streak for the Eagles, who had been ranked as high as No. 7 in the coaches poll, right behind Newbury. But those losses dropped them to the 11th seed and sent them on the road for their playoff opener.