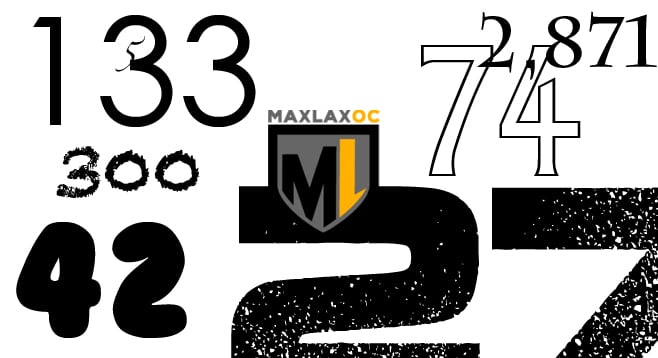 Orange County lacrosse never rests. Here is a recap from last week by the numbers:

300: Points the Thompson’s (Brothers Lyle and Miles and cousin Ty) of Albany U. scored as an attack unit that started all 18 games this season. The combined 300 points this year was more than 53 of the 67 teams total in Division I. The corps led Albany to a second-consecutive America East championship, an NCAA Tournament win over Loyola and a berth in the NCAA quarterfinals.

55: Combined D1 commits that played in this weekend’s All-American game. The South won 20-15 totalling in 35 scores. 22 of those 55 scored the games 35 goals. Six Orange County seniors represented the OC in a psuedo home game that took place at Capo Valley High School. More than 2,800 people tuned in to watch the full game on The Lacrosse Network.

4: Orange County associated players who were active this weekend in MLL play. Team USA middie and JSerra head coach Kyle Harrison of the Ohio Machine scored eight points from four goals and four assists in a loss to the Boston Cannons 17-16. Newport assistant Josh Hawkins led his Charlotte Hounds to a three goal victory over the Denver Outlaws. CdM assistants Jeremy Sieverts and Noah Molnar are on the Outlaws who were undefeated until this weekend. Sieverts scored 3 in the loss.

1: New Marine added to the many men who proudly serve our country after Aaron Buck of Northwood and UCSB entered his first 10 week training course to eventually become an officer. Aaron was an MCLA 3rd team All-American and recently led UCSB to a final four appearance at the MCLA National Championships.