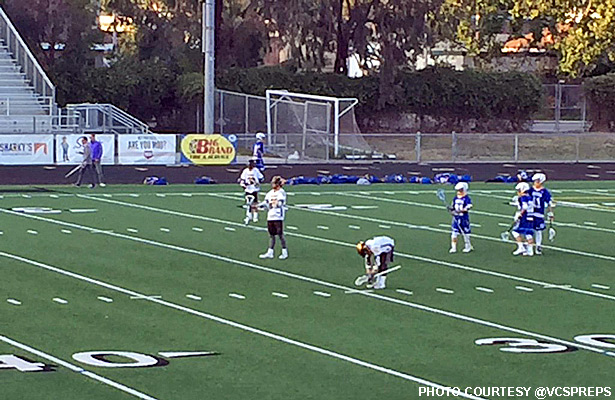 Senior attack Lucas Lagola scored three goals Monday, including the game-winner in overtime, to lift visiting No. 5 Agoura to an 8-7 Marmonte League win over No. 6 Newbury Park, the Chargers’ second one-goal win over the Panthers this season.

Agoura led 5-3 at halftime and 7-5 early in the fourth quarter, but Newbury wouldn’t go away.

Juniors Logan Bertram and Robbie McInerney scored to pull the Panthers even at 5-5 in the third, then, after Agoura and restored its two-goal lead, McInerney scored twice more in the fourth quarter to force overtime at 7-7. McInerney finished with four goals.

Agoura finishes with home games against Oaks Christian and Calabasas, while Thousand Oaks plays at Westlake and is home to Newbury Park. Newbury is home against Calabasas before traveling to T.O., and Westlake is home to T.O. before visiting Oaks Christian.

Monday, Newbury took a 2-0 lead in the first quarter on consecutive goals from senior middle Erich Wuesthoff, who lined up at attack to limit the amount of running he’d have to do on a sore knee that has bothered him all season.

But Noah Miller got Agoura on the board with less than two minutes left in the period, and Lagola tied it 2-2 early in the second period. McInerney scored his first, assisted by Wuesthoff, for a 3-2 Panthers edge, but Miller scored his second for a 3-3 tie. Goals from Marty Shargel, who finished with two, and Bradley Roache, pushed Agoura in front 5-3 at halftime.

Senior goalie Jason Pawlak was credited with 18 saves for the Chargers — “Jay was on fire,” Agoura coach Sean Lindsay said via text.

Information culled from @VCSpreps on Twitter and provided by Agoura Lacrosse.