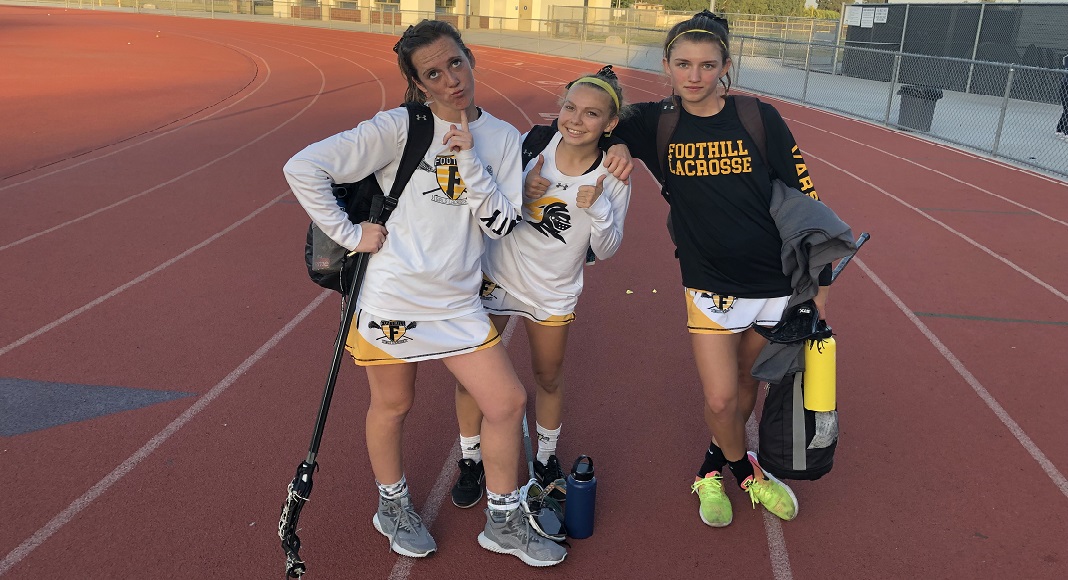 The Knights (16-1) will play fourth seeded Santa Margarita on Saturday at Segerstrom High School at 11 a.m. The Eagles beat fifth-seeded Trabuco Hills 16-8 in another quarterfinal.

“We had a lot of fun out there, we played for each other and we just had it going today and didn’t let it stop,” Brand said.

The upset-minded Sailors came out strong and scored the first goal of the game. The Knights knew they couldn’t afford a slow start and rattled off the next six goals, forcing a Sailors time out.

“We know Newport Harbor is a scrappy team and they’re always going to fight back no matter what the score is, so we just had to keep the energy the whole game,” Brand said.

The Knights led 8-1 after nearly 11 minutes had passed until Mariana Miller gave the Sailors their second goal. But Foothill answered back with four straight goals, taking a 12-2 lead at the 6:05 mark of the first half, forcing a running clock and putting the game out of reach.

“It was really coming out with a lot of energy. After Tuesday’s game, we won but we weren’t thrilled with our energy level. We didn’t play Foothill lacrosse, we came out slow, so it was important to come out fired up, in unison, all in the same page,” Knights coach Cristina Johnson said.

Miller led Newport Harbor with three goals while Delaney Knipp and Joelle Rothbard each had two goals. Mary Jones added one goal for the Sailors, who got eight saves from Willa Rath.

“Willa’s awesome. She puts her heart out there, regardless of how many goals get scored on her in a row, she doesn’t give up,” Sailors coach Brooke Martini said in regards to Rath.

Martini was proud of how hard her team fought all season long despite going through injuries to some of her key players and having just three seniors. The Sailors, the Sunset League champion, improved their win total by three and won their first playoff game under the guidance of Martini.

“We fought hard and never gave up. Whatever we’re thrown at, we’re going to keep pushing no matter what. We’re going to reflect on this and move forward and come back out next season stronger,” Martini said.

“I think it’s going to be really important that we are shutting down those players early and not allowing them to have as many opportunities as we did the last game,” Johnson said.