Lady in Red: Mikesell on the Carthage Life 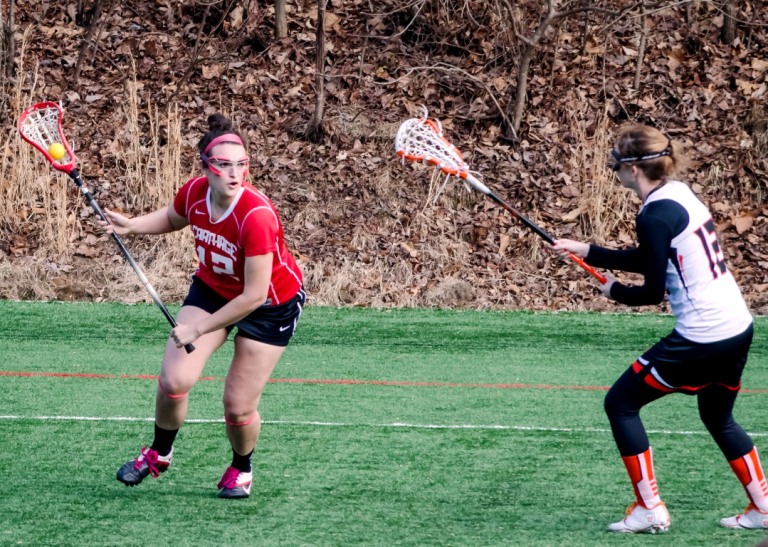 She exchanged the Pacific Ocean for Lake Michigan and could not be happier.  Aliso Viejo 2011 grad Chelsea Mikesell is now a senior at Carthage College in Kenosha, WI.  She told MaxLaxOC about it and revealed why Carthage is a Cali girl’s dream school.

Last week, Chelsea Mikesell started the preseason of her final year playing NCAA DIII lacrosse and studying at Carthage College.   The last three years have encompassed two starting seasons, a Most Improved Player award, earning a spot on the Director’s Honor Roll, and infinite hours studying towards a Marketing and Public Relations double major– while listening to the background music of Lake Michigan’s tide, of course.  It’s the same background music OC’s Carthage Men’s Lacrosse players Timothy Francis, James Fleming, Jared Ferrell, and Jordyn Williams have been tuning in to. These orange-blooded Red Men and Women not only study lakeside.  They dominate on the lacrosse field as some of the most beastly players on their teams.

With a significant number of Orange County-grown lacrosse players flourishing on its campus, there’s g0tta be something special about Carthage drawing us there.  It can’t be the Wisconsin winters…  That’s for sure.  But it might be the lakeside view, the greenery of its arboretum location, it’s midway location between Chicago and Milwaukee, its devoted faculty, or its Tier 1 national liberal arts curriculum.

Mother Sue Mikesell says Carthage is “beautiful,” “down-to-earth,” and a “smaller environment that cares about you as a student and player.”  According to her, the school actively helped direct Chelsea in the path of success she now drives through on and off field.  Sue gushes about Carthage almost as much as she does for her well-deserving daughter.  The school’s high-quality education and her Division III team is apparently the ultimate fit for the entire family.  Chelsea Mikesell told MaxLaxOC about it herself in an exclusive interview.

MaxLaxOC: How did you start off with lacrosse?  Where are you as a laxer now?

CHELSEA: As a sophomore in high school one of my friends of that time asked if I wanted to try out for lacrosse because she didn’t want to go by herself.  So I went and made varsity and loved the sport ever since. As a defensive player, I believe I play selflessly and encourage my teammates to be not only the best players but also the best people they can be on and off the field.  As a player today, I believe I have increased my abilities on the field exponentially and have come along way from the player I once was and I couldn’t be more grateful.

The first time I heard about Carthage was after I played in the Sandstorm tournament. I received an email a couple weeks later expressing their interest.  At that point, I had two schools where I was interested in playing. One was Liberty University in Virginia and the other, Carthage. I was conflicted and couldn’t make up my mind.  At the end of the day, I had to go with my gut and choose Carthage. It had so many benefits, the coach was great, and when I was there I knew this is the place I was supposed to be.

If anyone told me that I would end up in Wisconsin I would tell him or her they were crazy. I thought I would never leave California, but after visiting I fell in love with the campus and people instantly. The campus is located right on Lake Michigan, so I just traded an ocean for a lake! The business program at Carthage is well put together and has taught me so much for the future. The athletic department consists of so many new facilities, which is just more motivation to workout and stay focused. Playing lacrosse at Carthage has been a life-changing experience and I wouldn’t have it any other way. Coming to my final season as a collegiate athlete, I can’t help to remember all the memories and laughs I have had not just with my teammates but my family. The Carthage Women’s Lacrosse team was very welcoming and I have created life long friends. The past three years, my skills have really improved and developed through support from our former Coach, Lauren Hume and my teammates. I would not be the player I am today without their support and selflessness.  I continue to grow each year like any good athlete and heading into my final year I plan to give it all I got and just have fun. I cannot wait to see what this season has in store for the Lady Reds.

Are there any challenges you’ve overcome at Carthage?

One of the biggest challenges I had was to overcome the winters. Going from sunny, 75-degree weather to negative degrees is a big shocker that I was not ready for. Over the years I have adapted and learned how to live in the snow thanks to some of my teammates and friends. As far as school goes I haven’t had too much adversities due to the organized program Carthage has to offer. Like any great athlete, I have my good days and I have my bad.  I believe on those bad days you learn the most which will help shape and help you become a better person for it. I try to never take any moment for granted especially going into my final year.

Who do you have to thank for the lacrosse experience you have now?

I developed mostly in OC Lacrosse with Mary Adamicki, along with all the coaches that helped and have coached me throughout club. I also have to thank Coach Dave Elkins, my high school coach at Aliso Niguel for supporting me and pushing me to make me a better athlete and lacrosse player.  Also, I would love to acknowledge Coach Hume and Coach Amy Gulbranson for believing in me and taking my game to the next level. They both guided me to become the best player I can be. The person I would love to thank the most would be known to the world as Sue Mikesell but to me, my mom. She has been behind me from the beginning and supports me in any decision I make. She is one of the most spirited fans, but an even better mother. She is one of the most caring people I know and couldn’t ask for anyone better.

What are your plans after college?

After college, I hope to get a job in sports marketing anywhere in the United States. My dream goal would be one day to work for Nike under the marketing department. After season is over, I will be playing in the Down Under Cup in Australia representing the USA Lacrosse Team. I truly am so blessed to be given this opportunity and so grateful for my time here at Carthage.

From one of Chelsea’s past OC Coaches:

Keep it up, Chelsea Mikesell!