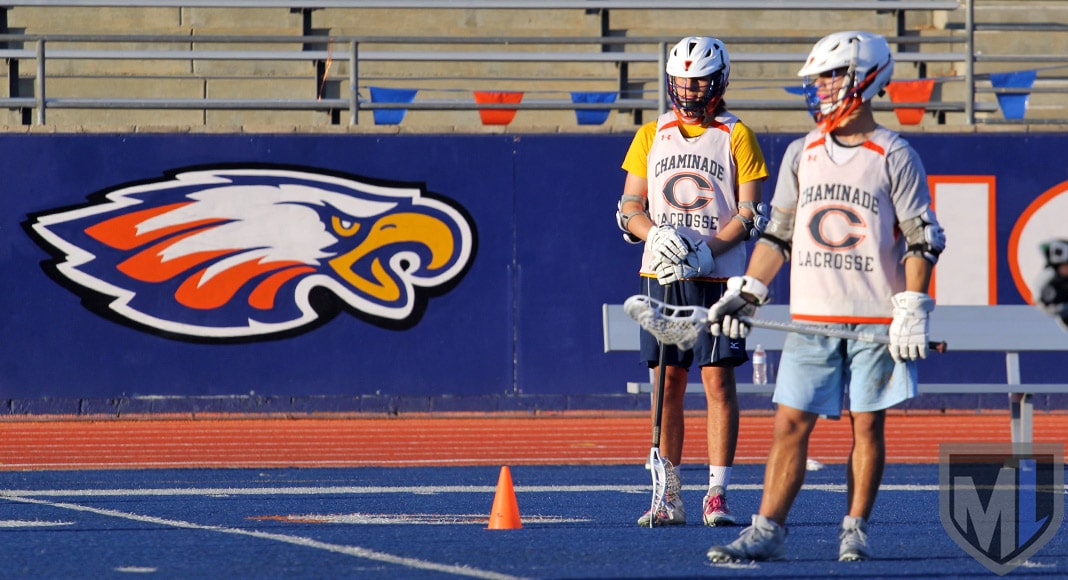 Coming off a third consecutive playoff appearance and returning its entire 2017 roster, there is a lot of optimism at Chaminade these days. The Eagles were voted No. 9 in the preseason coaches poll and will enter the 2018 season ranked in the Top 10 for the first time.

Where they will be ranked come May remains to be seen, but head coach Steve Lane believes the Eagles can move up.

“I genuinely believe that we could win every game on our schedule,” Lane said, “and if not, we can be competitive in every game. We have that going for us.”

That’s never easy to do, and it’s especially difficult in a Mission League that features two-time defending Southern Section champion Loyola and two-time LA semifinalist Harvard Westlake. Chaminade is 1-11 against those two over the last three seasons, so Lane clearly is setting a high bar for his Eagles.

Part of the coach’s confidence comes from the fact the Eagles return everybody from last year’s 10-8 squad, and part of it comes from an influx of younger players that has given the program the kind of depth it hasn’t seen since 2010, when it last won the Mission League.

“We had no seniors last year,” Lane said, “and this year we have five, and we have four juniors, so the majority of our program is sophomores and freshmen, which is fantastic. Even though we’re light on numbers, we’re not really graduating a whole lot for the next two years.”

Another big reason for optimism is that Lane and his players have known since May what they’d be working with entering this season. With no need to rebuild or fill holes, the entire offseason was devoted to building chemistry and continuity.

“Chemistry is a big one,” he said. “What this team has always had, even when we weren’t super competitive, was we had fight, and I don’t think that has been lost while we’ve gained better IQ and better depth. We have a very passionate team on the field, so that’s definitely going to play into our favor.”

Lane said the Eagles will not field a JV team this season (though he hopes to bring it back next year) and instead will field a varsity roster of close to 30 players, giving his squad unprecedented depth.

“We have easily two lines of great midfielders, and probably 4-5 kids we can put on the defensive or attack side of the ball,” he said. “I feel like we have a lot of the pieces we need now.”

On offense, those pieces include senior attack/midfielders Max Kim, who is committed to NCAA Division III Bates, and Mac Griffin, a star wide receiver on the Eagles football team. Junior two-way midfielder Owen Larson, who doubled last year as the Eagles’ face-off specialist, also is back. Griffin and Larson both were second-team All-Mission League.

Lane said he also expects contributions from sophomores Trevor Roberts at midfield, Nino Leone at attack and A/M Nico Rabushka, all of whom played for the varsity as freshmen. Rabushka, a speedy and versatile offensive player, moves back to his natural position on offense after who playing goalie much of last season to fill a need.

Defensively, D-III Albion commit Thomas Nelson returns to the back end after spending time playing attack last season, and he’ll be joined by sophomores Carson Holtke and Jake Cloutier. Sophomore Ryan Cornelius, a member of the 2017 Under Armour Underclass West team last summer, will play both LSM and close defense.

“I believe this team could make it pretty deep in playoffs this year, and not just a first-round win,” Lane said. “Obviously we have to put the pieces together and execute, but we have all the right parts to do that, compared to what I’ve seen over the six years I’ve been here. I think this team is right there with some of the teams that have made a good run.”