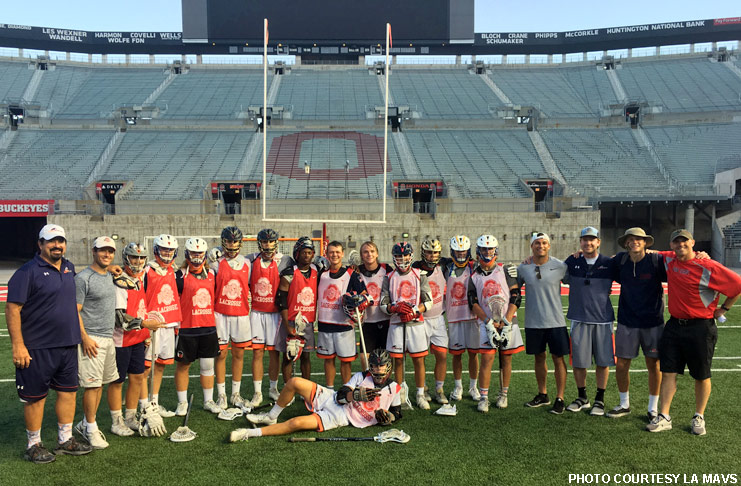 The LA Mavs National team went undefeated and claimed the championship at the Buckeye Battle team tournament at Ohio State University earlier this month. And the Mavs 2 squad took third place after dropping a one-goal decision in the semifinals.

“Our goal with our National team trips,” Mavs coach Jack Zorzi said, “is to travel with the boys as a team and allow them to experience life on a college campus in another part of the country while competing against premiere club and high school programs from outside Southern California. The Buckeye Battle allowed us to do that with two teams, which was a first for us.”

Last year the LA Mavs National took third place at the Irish Recruiting Team Camp at Notre Dame. This year, the club entered two rosters at the Ohio State event, which featured 10 other teams participating, many of them high school programs that had been playing together since the early spring and a few club teams. Among the clubs participating was Resolute, which is run by Ohio State alums Anthony Kelly and Greg Bice along with Buckeyes head coach Nick Myers.

“We take these trips so the boys can feel what it’s like to live and play at a big time university,” Mavs director Sean Lindsay said. “Staying on campus, playing at the same facilities that D-I athletes use on a daily basis is an amazing experience for these kids, regardless of if they go on to play at the next level or not. Both teams did extremely well, and I could not be more proud of the way they represented Los Angeles lacrosse.”

The LA Mavs National 1 squad went 8-0 in the event, beating the KC Lions 6-1 in the semifinals and Worthington Kilbourne HS 11-3 in the championshp game.

LA Mavs National 2 lost 4-3 to Kilbourne in the semifinals and was declared the third-place finisher by virtue of an earlier victor over fellow semifinals KC Lions.

“We had a close first game, allowing six or seven goals,” Mavs and Oak Park coach Tarik Ergin said, “but after that our defense was lockdown. [Three Mavs] defenders were in the all-star game, although every one of these lads should have been. Our defense was dominant and created a ton of transition. Superlative goaltending by Sean Richard (Detroit Jesuit) and Zach Tripp (Agoura) allowed our defenders to focus hard on interior defense and leave the outside shots to the net minders. These two were likely the best two goalies at the tourney, but as Sean has committed to Marquette, only Zach was in the all-star game.”

In all, 13 LA Mavs National players were selected by OSU coach Myers to play in the event’s all-star game, 10 from Mavs 1 and three from Mavs 2.

“It was clear that we made an impression early on, as we had more players selected to the all-star game by Coach Myers’ staff than any other program in attendance,” Zorzi said. “The Mavs players accounted for six of the eight goals scored in the game. Tyler Bradbury (2g, 1a), Cort Rogers (2g, 1a), Sultan Daniels (1g) and Douglas McCarthy (1a). Owen Larson had two caused turnovers, and Casey Hoops had one. [Goalie] Zach Tripp was a force and allowed only one goal.”

“[Redell] was everywhere all weekend, causing turnovers and sparking transition,” Zorzi said. “He must have had four assists on the weekend. He was an animal.​”

Daniels was named Camper of the Week for Mavs 1, essentially the team’s MVP award, Zorzi said. “He took faceoffs, was our point man in the midfield on offense and played defensive middie, as well,” Zorzi said. “He played incredibly unselfish and initiated his dodges to set up his teammates for scoring opportunities all weekend.”

Holtke earned the honor for Mavs 2. “Holtke led a defense that featured only one other member with high school lacrosse experience (Massimo Ridino, Oak Park 2020),” Zorzi said. “He took on the task of controlling a young defense whose opponents were often 2-3 years older. He drew the opponent’s top scoring threat and consistently won his matchups. Carson handled the ball extremely well in transition and recorded one goal and seven assists. In addition to being the anchor on defense, he helped out by facing-off and by running LSM. He never left the field. Carson also played with the Mavs 1 team when game times did not conflict and contributed with that unit, as well. He was an absolute force and a leader for his group.”

“For me, it was an honor and privilege to have the opportunity to work so closely with such fine young men in this historic venue,” Oak Park coach Ergin said. “I am so impressed not only with the performance the kids put in all over the field, but also with their gentlemanly, respectful comportment. Coach Myers and his Buckeye players were so gracious and accessible, interacting with the boy’s quite a bit. They have a first-rate program in Columbus and obviously pay attention to the smallest of details.”

Another successful Mavs National trip is in the books. Thank you to the Coach Myers and the entire Ohio State camp staff for hosting a great event. Congratulations to the Mavs 1 team on going 8-0 and claiming the 2017 Buckeye Battle title. Congratulations to Mavs 2, who had a very successful weekend and fell one goal short of reaching the title game and secured third place overall! Congrats to our 13 Mavs named to the OSU all-star game. Way to represent Los Angeles lacrosse! Finally, congratulations to our campers of the week, 2019 Midfielder, Sultan Daniels (Harvard Westlake) and 2020 Defender, Carson Holtke (Chaminade). . . . Mavs National | 2017 Buckeye Battle | #HHH