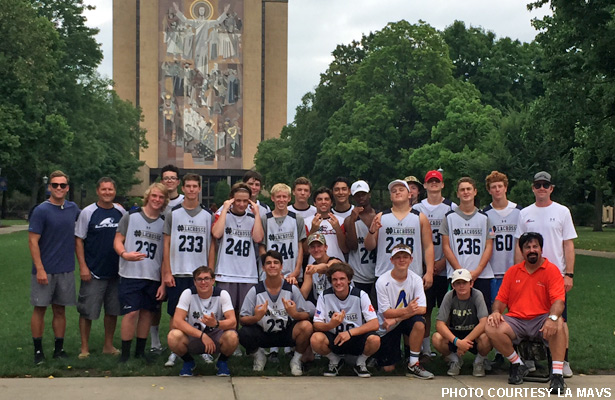 The LA Mavs National squad took third place at the 2016 Irish Recruiting Team Camp last week, winning its pool with a 3-1 record before losing in the semifinals and bouncing back with a come-from-behind win in the third-place game.

“We played some solid high school and club teams from the Illinois/Indiana area,” said Jack Zorzi, one of four coaches who made the trip, “so it was nice to see some new players and different competition.”

The Mavs’ one pool-play loss and their semifinal loss both came against Carmel (Indiana), which has reached the Indiana state high school title game in six consecutive seasons. Carmel won the state title in 2011, 2012, 2014 and 2015 and finished runners-up in 2013 and 2016.

In pool play, Carmel got five goals from rising junior attack Chad Kittaka and limited the Mavs’ offense with a strong defense behind rising senior and Hobart commit Kaleb Boyl to win 7-4. In the semifinal rematch, though, Casey Hoops (Oak Park 2018) held Kittaka scoreless and Parham won more than half his face-offs. The result was more offense for the Mavs overall, but Carmel capitalized on a number of man-up opportunities to post an 11-8 win.

In the third-place game, played immediately following the semifinal loss, the Mavs started slowly against Team Navy and found themselves trailing 5-0 at halftime. But Manyak got the Mavs’ offense started in the second half, sparking a 6-0 run and a 6-5 victory as the defense blanked Navy in the second half. Max Bulko (Oak Park 2017) scored the game-winner on a feed from Bryce Hardy (Oak Park 2018).

The LA Mavs National roster consisted almost entirely of players from the Conejo Valley and LA areas, with three players joining from outside the area. Agoura coaches Sean Lindsay and Zorzi, along with Oak Park’s Tarik Ergin and Oaks Christian’s Geoff Sebold coached the group.

“Our philosophy with the LA Mavs National team is to not only have the opportunity to compete against other top programs around the country,” Zorzi said, “but also to provide a unique experience where our players will travel to a college campus, live together in student housing and experience life as a collegiate student-athlete.”

Last year, the LA Mavs National team went to Champ Camp in Baltimore. This year, Zorzi said they picked the Irish Recruiting Team Camp “for its reputation of high-level competition as well as for its historic setting in South Bend.”

“With the current recruiting landscape focused heavily on the individual showcase,” Zorzi said, “our emphasis is developing a team-lacrosse mentality, which is required when facing opponents who have been competing together for an extended period of time, such as Carmel and New Trier [11-time Illinois state champ] high schools. We felt this trip was highly successful and helped us further achieve our goal of refining our players’ team-lacrosse IQ.”

The Mavs opened the tournament with an 8-7 overtime win over Illinois-St. Viator, which finished third in its state high-school tournament last spring. Tyler Bradbury (Oak Park 2019) scored the game-winner off an assist from Shargel. Dutton, Shargel, Manyak and Robbie McInerney (Newbury Park 2017) also scored for the Mavs.

“James Vils (Oaks Christian 2018) and Sean Richard (Detroit Jesuit) led our defense from in cage,” Zorzi said. “We won despite being one man and then two men down during overtime.”

The Mavs never trailed in their second game, an 11-6 win over the Michigan Warhawks. Hardy scored first, and Bulko, McInerney, Bradbury and Shargel also scored. Parham and Torgove dominated face-offs.

The squad moved to 3-0 with a 12-5 win over Team Total U19 (Wixom, Michigan), sparked by a coast-to-coast clear and goal from defender Zack Boyle (Calabasas 2018). Once again, Parham and Torgove handled the face-off dot, and Bradbury, Shargel and Manyak capitalized on offense.