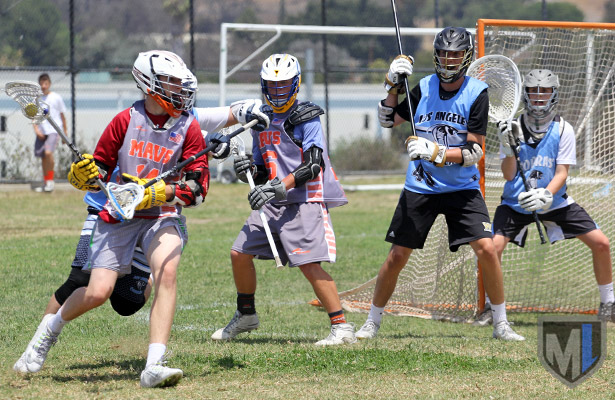 The LA Mavs opened the 2016 summer with championships in the Boys High School Elite and Boys High School divisions at the Battle of L.A. in San Pedro last weekend. The Mavs took the Elite title with an 8-6 victory over Team 12 United on Sunday. The Mavs had beaten Team 12 9-6 in pool play.

The Mavs tied Cobra Elite 7-7 in their opening pool-play game, then beat Team 12 and SoCal Express out of Orange County.

Here is a quick rundown on each of the other divisions in the tournament.

Boys HS Open
SBLC Gold 9, West LA Riptide 5
The Riptide went 3-0 in pool play, including a 10-8 win over Sant Barbara Gold, but SBLC came back Sunday with a win in the title game.

Boys HS
LA Mavs 7, Beach Burn 1
After going 2-1 in pool play, including a loss to Beach Burn, the Mavs beat SBLC White 9-2 and Shock Lacrosse 6-4 to reach the title game. Shock had gone 3-0 in pool play.

Congrats to all Mavs teams on a great start to summer 2016! Thx to the Battle of LA and our friends at @LACobrasLax! pic.twitter.com/3e7TtTBPwI

Girls HS
Los Angeles Aces 12, Scream Black 4
The Aces went 5-0 in the tournament, winning by an average score of 14-3.

Boys U15
Team 12 United 6, Factory Select 5
Team 12 had lost to Factory 10-3 in Saturday’s pool-play action, handing Factory its only loss of the tournament.

Girls U15
Los Angeles Aces 1, OC Crush U15 0
The Aces dominated the bracket, winning four pool games by a combined score of 59-11.

Boys U11
Trident 10, Santa Monica Dragons 1
Trident went 6-0 in the tournament, allowing only four goals. LA Mavs went 3-0 in pool play, then won its first bracket game before falling to the Dragons in the semifinals.

Boys U9
Santa Monica Berserkers 13, LA Mavs 3
Both teams went undefeated in pool play and were still unbeaten heading into the bracket championship.