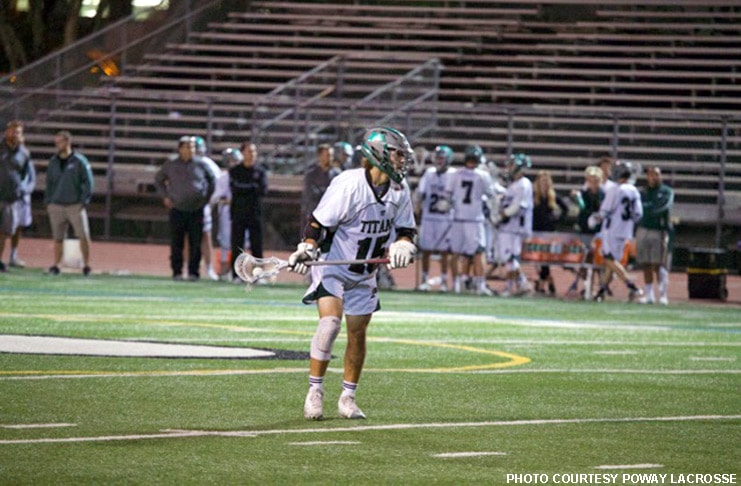 When the 2017 schedules were published late last year, it’s likely that March 24 was circled on the calendars of the La Costa Canyon coaches and players. The Poway Titans, the team that ended the Mavericks’ season during the playoffs last spring en route to its second consecutive CIF title, was scheduled to visit LCC on Friday night, and LCC probably had that playoff loss in mind. In addition, new Mavericks coach Kevin Cooper spent the last three seasons as an assistant at Poway, making the stakes even higher.

Cooper’s Mavericks did not waste the moment. LCC came ready to play against the favored Titans and walked away with an 8-7 win after withstanding a late Poway surge that came up short.

The Titans opened the game with a quick goal by junior LSM Kobe Brown and another by junior attackman Harrison Greaves. LCC countered with two goals to tie it 2-2 after the first quarter.

Poway senior captain Nick Beeson (Bryant) extended his all-time Titans goals lead with his 20th of the season in the second quarter, but the Mavericks got goals from Jack Keen and sophomore JJ Silstrop (Denver) and led 4-3 at halftime.

LCC pulled away a little bit in the third quarter with some outstanding transition offense, getting goals from midfielders Andrew Beacham and Grady Beck, at one point leading by four.

Poway quickly turned things around with a wraparound goal by senior attackman Jack Woodard and a top-shelf strike by junior middie Kienan Morrissey. But LCC’s Silstrop rifled a highlight reel left-hander on the move that pinned the top corner to put the Mavericks back up by three at 8-5 with four minutes to play.

Poway didn’t quit. Senior captain Owen Springett (UMBC) took matters into his own hands with two goals in the last three minutes, aided by critical face-off wins from Titans freshman Teagan Bultman (Brown), to pull Poway within one at 8-7. The Titans had the ball with 30 seconds to go and a chance to tie but couldn’t get off a final shot. LCC celebrated a big early season victory in front of an ecstatic home crowd.

The game was well-played on both sides, with both teams fighting hard for 50-50 ground balls, and at the face-off X. Both goalies turned in stellar performances, with Poway’s Kellan Cutting saving 14 and LCC’s Ryan Winn earning likely MVP honors with four crease denials against Poway shooters among many other big saves.

Perhaps the difference in the game was the performance in extra-man situations, with LCC scoring two of three man-up opportunities, with Poway unable to score in their only EMO.

The win for the Mavericks puts their record at 4-1. The Mavericks play host to Colorado powerhouse Regis Jesuit on Tuesday night. Poway moves to 6-2 and also will face a tough challenge Tuesday night, traveling to Coronado to take on the 5-1 Islanders.