The Bishops Knights (4-0) entered the game against La Costa Canyon Mavericks (3-2) after back-to-back wins against visiting teams; last week the Knights beat Castle View (Castle Rock, Colo.) 12-11 and Colorado Academy ( Denver, Colo.) 16-9.  La Costa Canyon came into the game off of a tough  loss to Poway. The game would end with the Maverick  besting the Knights by 6 points to win the game 13-7.

The game started with the Maverick’s Jack Keen scoring an early unassisted goal, the first of his three for the game.  Keens score also marked the start of a 5 goal run for the Mavericks. La Costa Canyon’s Jake McClean (Towson), Connor Rafferty,  Andrew Beachem (Towson) and Michael Rice, all contributed to the 0-5 score at the end of the 1st quarter. 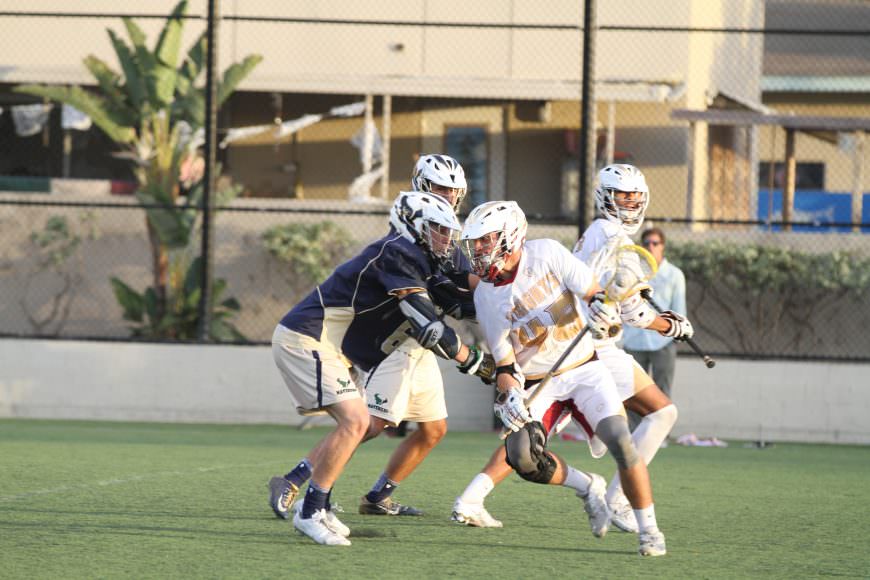 In the 2nd quarter Bishops’ Christian Ford (Michigan) fed Cal Costa (Ohio) on the crease to put the Knights on the board. Another Ford to Costa goal brought the score to 2-5.  Goals from Ryan Hastings and Ford brought the score to 6-7. before Bishops went man-up for an opportunity to tie the game.  The Mavericks solid defense thwarted the Knights Extra-Man Offense, forced a turnover and gave Jack Kagan a score off of the resulting fast break.

La Costa Canyon held Bishops to 1 goal for the 4th  quarter, while Rafferty put up another 2 goals and 1 assist. Ultimately the Mavericks secured a 13-7 victory.