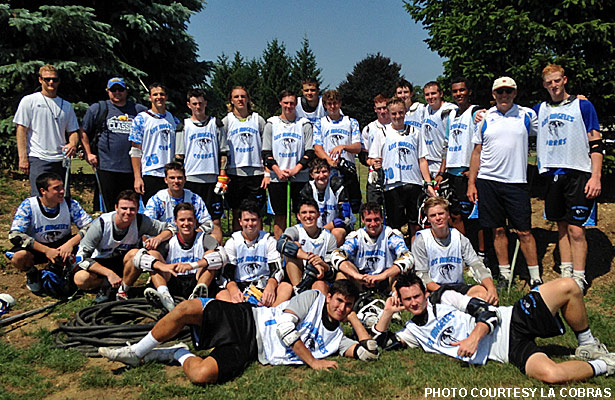 The first stop was Rock Hill, South Carolina, right outside of Charlotte, for the Carolina Shootout, put on by High Point University coach Jon Torpey. The Cobras finished round-robin play in the Elite A bracket with a 4-1 record, with the sole loss coming at the hands of a very strong Battlelax team out of Northern Virginia.

The final stop was the Long Island Warrior Classic held at Hofstra University, a homecoming for LA Cobras Elite coaching staff Brett Tietjen (Hofstra ’03) and Mike Gvozden (Hopkins ’08), whose brother Andrew was an All-American goalie at Hofstra in 2010.

The Cobras opened the tournament with a huge win against defending Nassau County Class A champion Syosset, winning 7-6 in the lacrosse-only Shuart Stadium. They followed that with an 8-5 win against Unparalleled Salty Salmon, made up of players from Southern Connecticut powerhouse programs Wilton and Staples. The Cobras lost their third and final game in pool play to House of Sports of Westchester, N.Y., despite dominating in ground balls and shots on goal. Unfortunately, the House goalie was hot all game, and the Cobras lost 6-4 after surrendering an open-net goal in the final minute.

The Cobras finished in a four-way tie for second in the 12-team field but were the odd-team out of the four-team playoff due to tiebreakers. The Cobras finished strong in the consolation bracket, though, with wins against the Long Island Tomahawks and Jersey Thunder to wrap up a successful trip.

Special thanks to Hofstra coaches and staff — Seth Tierney, JP Brazel, John Gorman and Cathy Aull — for putting on such a fantastic event and giving the Cobras a tour of the lacrosse facilities.

The Cobras went 9-0 in the two events, scoring 79 goals and allowing only 19. Defensive starters Colin “Squid” Hawkins, and brothers Cam McAusland and Shane McAusland held down the back line in front of goalie Cam Chavez.