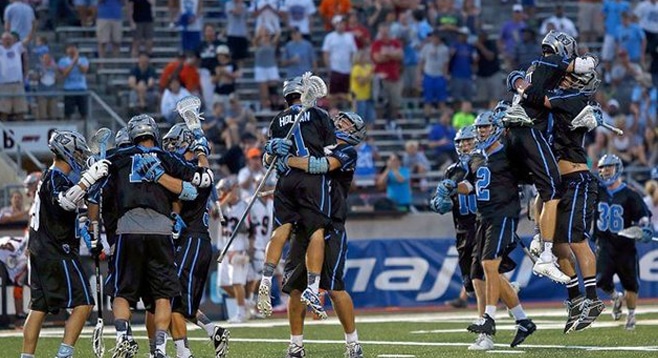 In a game that saw 45 total goals , the Ohio Machine (6-6) defeated the Denver Outlaws (8-4) in an overtime thriller thanks to Coca-Cola Player of the Game, JSerra head coachKyle Harrison‘s game winner.

Denver came out strong scoring the games first three goals with CdM assistant coach Jeremy Sieverts tallying the third. It seemed like Denver would continue their pace until the Machine stormed back and answered with four of their own including one from Harrison. Denver snuck one more in to tie the game at four goals apiece heading into the second quarter.

Scoring came in bunches for both teams in the second quarter but thanks to eight goals from Denver, the Machine found themselves down 12-9 heading into the half.

The feeling emanating from the buzz at halftime was that the pace was not about to slow down. Both teams were playing efficient offense and boast some of the best finishers in the game, a perfect storm for a record breaking night. Denver again scored in bunches but was matched by a late five goal run by the Machine to bring them within one heading into the fourth 17-16.

Harrison’s Machine held a previous record of 18 goals scored in one game and it was almost certain that they would surpass that mark with plenty of time to establish a new record. Marcus Holman of the Machine (Johns Hopkins) went off in the fourth which led to a late lead 21-20. Denver battled back and after a few goal exchanges led 22-21 with two minutes to go. Holman would come through with his fifth goal of the game to tie the game at 22-22 and send it to overtime.

45 seconds into overtime Ohio goalie Brian Phipps gobbled up the shot and got it down to our own Kyle Harrison, who helped Ohio secure the 4th place position in the league and an overall .500 record by netting a laser rip from a few feet inside the 2-point arc.

Harrison’s four goals including the OT winner earned him the Coca-Cola player of the game.