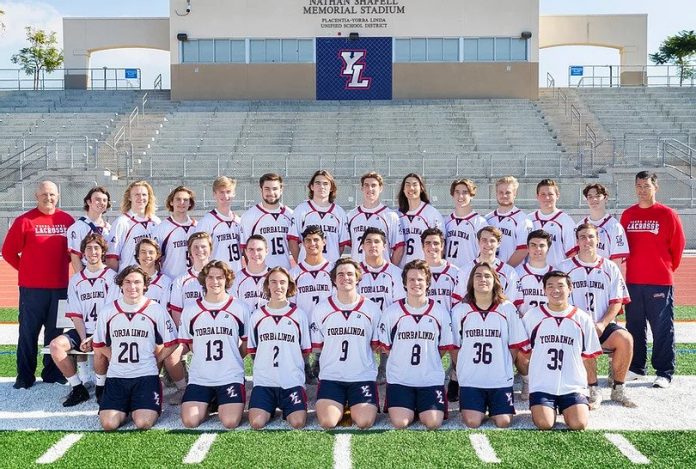 The south vs north Orange County this past week in Yorba Linda was a barn burner with the Mustangs fighting off  San Clemente’s furious comeback attempt in the final minutes of the game.

Yorba Linda held a 9-5 with 6 minutes remaining in Q4, setting the stage for a wild stretch with some reversed calls and confusion in which San Clemente rattled off three unanswered goals to give themselves a chance in the final minute of play and However, senior defenseman Trevor Krause, the player who had the most influence on this game, once again shined to give Yorba Linda the 9-8 win.

Rodgers was just fantastic in defeat with four  goals and two assists.  He scored and created offense off-ball with catch and shoot goals, as well as dodging to create a slide and finding the open player for the assist.  He was a force.

Krause, a senior defenseman, had a monster game for the Mustangs.  The newer or casual lacrosse fan probably did not understand watching the game the impact Krause had.  As a coach who has coached several high school All Americans and run a college defense, I knew from the first quarter this kid was having a big night.

Blake Hardison was excellent too, having a big night for the Mustangs.  Hardison had an assist to Lucas Demogines (3g) for the first goal of the game, and followed that with an unassisted goal to make it 2-0 Yorba Linda.  Hardison, a senior attackman,  finished with five points (2g,3a) and has looked very good in two games so far.

Krause kept it rolling when recovered a tough groundball and ignited a transition that resulted in Tyler Bohlinger (3g) scoring to give Yorba Linda a 3-0 lead. Krause also had plays on the defensive end that thwarted the San Clemente offense and continued to spark Yorba Linda scoring chances.

Meanwhile, the Tritons after going down 4-1  were only down 6-5 at the half as Rodgers caught fire.  He assisted on the second goal and scored the fourth and fifth San Clemente goals.  Dante Decollibus was San Clemente’s second leading scorer with one goal and two assists.

Midfielder Brock Melanson scored on a feed from Blake Stewart for the second game in a row to close out the first half.

Krause continued his stellar one vs one play in the second half. Hiis ground ball performance was dominant.  He had nine ground balls on the night and had his 10th nullified by an off ball call away from the play.  Nine  ground balls for a close defender who doesn’t play the wings on faceoffs is a big number.  Most high school games four to five groundballs is big game, six to seven is covering tons of ground, nine is changing a game.

Yorba Linda expanded their lead to 9-6 on goals from Demogines and Hardison and appeared in control, holding San Clemente   scoreless in the 2nd half until a little over six  minutes remained in the game.  Then Rodgers started to take over. He jumped on the come back train and scored an unassisted goal on a broken play and followed that with a goal with 1:59 remaining in the game.  Three quick ones for San Clement  in the last six minutes and we had a wild game going in “the land of gracious living” ( official YL town motto).

After some wild  loose balls and reversed calls San Clemente  had a final chance to tie.  Short on time and I believe out of time outs, they went 1 vs 1 vs Krause on an inverted set dodging from up top with 19 seconds remaining and once again the senior four-year starter  was up to the challenge getting under the hands of the offensive player creating no chance for a shot and an easy double team to a ground ball to seal the victory.

Great game between two very well coached teams.  Rodgers was outstanding in defeat, hustled the whole game, made plays all night.  Krause had a game changing performance adding three CTO’s, to his nine ground balls and more than a handful of dodges and sharp passes in the clearing game, as well as excellent 1 vs 1 play.  2 baller performances…..