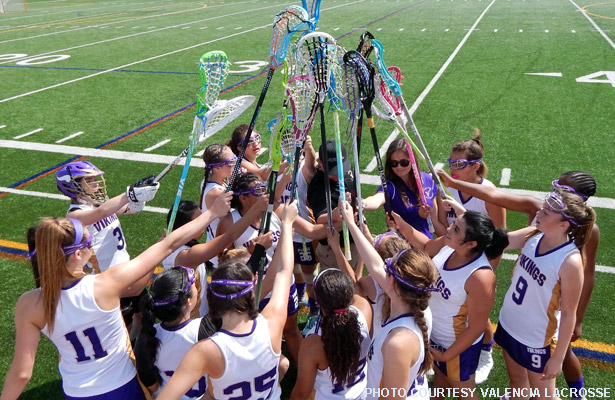 Kayla Konrad led the way with a blistering eight goals on 10 shots Tuesday, as No. 20 Valencia routed Westridge School 19-10 for its sixth consecutive victory. The junior standout has 51 goals through 11 games for the Vikings.

Westridge drew first blood, scoring less than a minute into the game, but the Vikings answered strong with six goals over the following nine minutes. Sophomore attacker Kiki Shakir opened the Valencia scoring with three quick goals, followed by two Konrad tallies and one by sophomore Chy Pagkalinawan to jump out to a 6-1 lead. The Vikings would lead 11-4 at the half.

Once again, Westridge scored first in the second half, and Valancia responded immediately off the next draw with a Shakir goal. The teams traded goals over the next several minutes before the Vikings stretched their lead to 18-9 with seven minutes remaining. Valencia protected its lead with a stifling defense, led by senior Cassie White, who also added several key clears and an assist.

Following Konrad’s eight goals on the Vikings stat sheet was Shakir with five, sophomore Mandy Yamamoto with three goals and an assist, two goals from Pagkalinawan and a goal and two assists by freshman Shelby Lewis.

Valencia rides the six-game streak to a 7-2-2 final regular-season record and awaits this weekend playoff pairings.