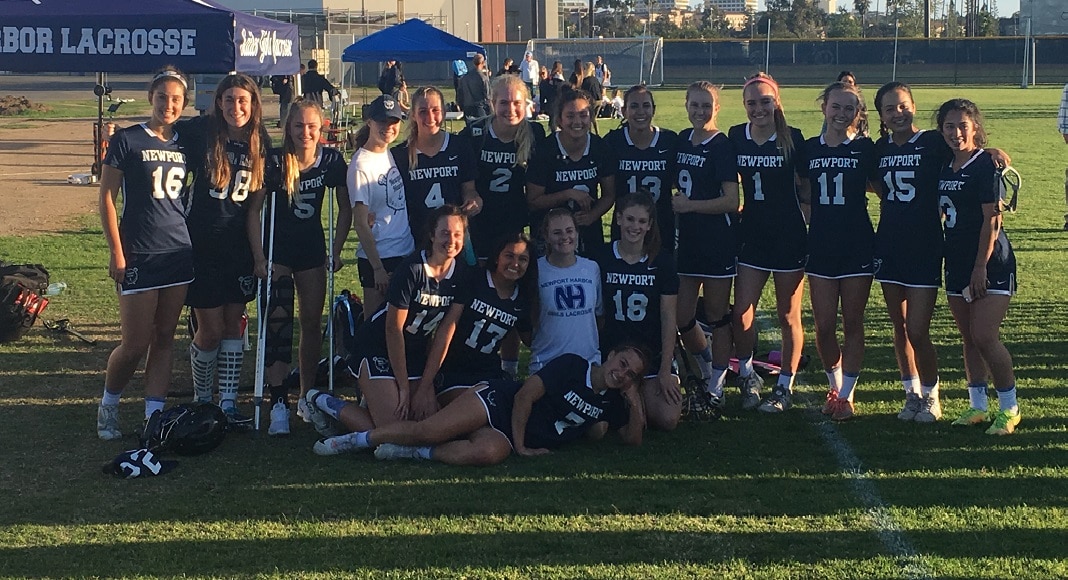 Newport Beach – Southern California sports fans have seen it so many times before.  The clock is winding down and the game is on the line.  Who you gonna call? Kobe, that’s who.  Only this time it was Newport Harbor senior Kobe Richardson not Kobe Bryant who drilled home the game-winning point with only seconds remaining.

With the score tied at 8-8 and about 11 seconds left in regulation, senior Kobe Richardson, in her first season of varsity,  was given the ball for a free position shot to possibly rewrite some new history in the Battle of the Bay rivalry. Richardson attacked the cage and found a lower-right opening.

“I don’t normally drive for the team. I’m not a top scorer, but being able to get that last opportunity to score and win it, was just really something special for me. I’ll never forget that,” Richardson said, who had five goals in eight games prior to Friday’s game.

For the first time in recent Battle of the Bay history, both combatants entered the game under .500, but that did nothing to quell the intensity of either side in perhaps the best rivalry in local girls’ lacrosse.

The beginning looked promising for the Sailors who were trying to earn back to back Battle of the Bay victories for the first time ever.  The Sailor scored the first three goals of the first half to open up a 3-0, forcing CdM coach Aly Simons to call timeout. Simons said after the game that her team came out with some pre-game jitters that she wanted to settle.

Even after the timeout, Newport Harbor continued to press and put another point on the board.  The Sea Queens didn’t get their first goal of the game until the 3:47 mark of the first half and then they added two more goals to head into halftime only down 4-3.

After the Sailors made it 5-3, CdM grabbed its first lead of the game at 6-5 by scoring three straight goals. One of CdM’s players however, was hit with a yellow card, leaving the team down a player for two minutes.

Newport Harbor took advantage of the situation and regained the lead 7-6 thanks to goals from Mariana Miller and Joelle Rothbard. The Sea Queens responded, as Caroline Brewster evened the game at 7-7 and a minute later, Joslyn Simaan gave the Sea Queens an 8-7 lead with 7:01 remaining.

Caroline Farley‘s third goal of the game tied the game at 8-8, and on the ensuing draw control, the Sailors were able to win it and wind the clock down to  set up Richardson’s eventual game-winner.

“I’m so proud of my team for fighting through and coming through hard and pulling off a great win against a good team,” Newport Harbor coach Brooke Martini said.

In addition to Farley’s three goals, Rothbard added two goals for Newport Harbor while Miller, Delaney Knipp and Ella Kenney had one goal apiece. Willa Rath had five saves for the Sailors.

“In the past, we have trailed, so we understand what it’s like to be trailing and to be down by a certain amount of goals, and in that moment, we’ve learned from the past and we know how to stay composed. When we are down, we know we can get back up,” Martini said.

Simaan led the Sea Queens with three goals while Brewster and Ellery Amdor each had two goals apiece. Lauren Rowe also scored for the Sea Queens, who also got 11 saves from Ashley Olson.

“This is what a good game looks like, back and forth, back and forth. This [the game] is great proof that we could hold our mental toughness,” Simons said, adding that she was proud of how her team overcame an early 4-0 deficit.

Up next for the Sailors (4-5), a road game against another rival, Los Alamitos on Tuesday at 5:30 p.m. The Sea Queens (1-5) resume Pacific Coast League action on Monday at home against Northwood at 3:15 p.m.