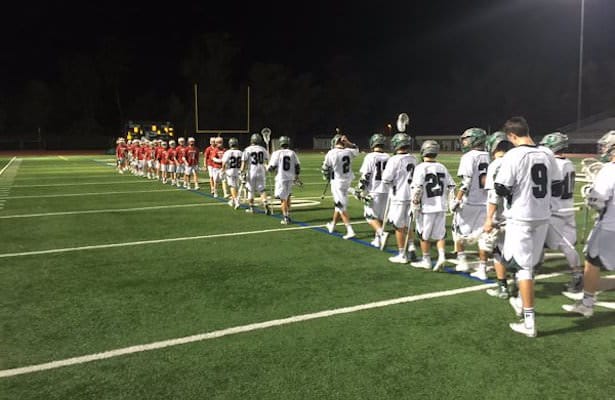 Kobe Brown chose the biggest of moments to score his first goal of 2016. Brown’s goal with eight seconds left in the game lifted Poway to a dramatic 9-8 win over the Woodlands School (TX). Brown’s goal broke the eighth and final tie of a game that was so tightly contested that neither team ever led by more than one goal.

The contest pitted Woodlands’ lock-down defense against Poway’s high-powered offense. The defensive-minded Highlanders entered the game allowing an average of less than five goals per game while the Titans are scoring at a clip of 15 goals per game thus far. Through first three quarters, the pace of the game favored the Woodlands. After battling to a 4-4 tie through halftime,the Highlanders scored the only goal of the third quarter to take a 5-4 lead into the final 12 minutes.

Then within nine minutes to play LSM Jake Fiske tied the game and opened the floodgates. Less than a minute later, Brad Belasco supplemented his two first half goals and completed his hat trick (assist Zach Hodge)  to put the Titans up 6-5. Woodlands tied the score at 6:05. Belasco added his fourth goal of the night, this time with an assist from Nick Beeson, to put Poway back in the lead with 4:30 to play. Woodlands tied the game with 2:14 to play. Jake Landon (assist Hodge) gave Poway an 8-7 lead with 1:22 to play. Woodlands bounced right back to tie the game with only 23 ticks left on the clock. Brown only needed 15 ticks to set off the celebration.

Thanks to @TWHSLax for making the trip to Southern Ca. Good luck on the rest of your season! pic.twitter.com/StEoAjneRV