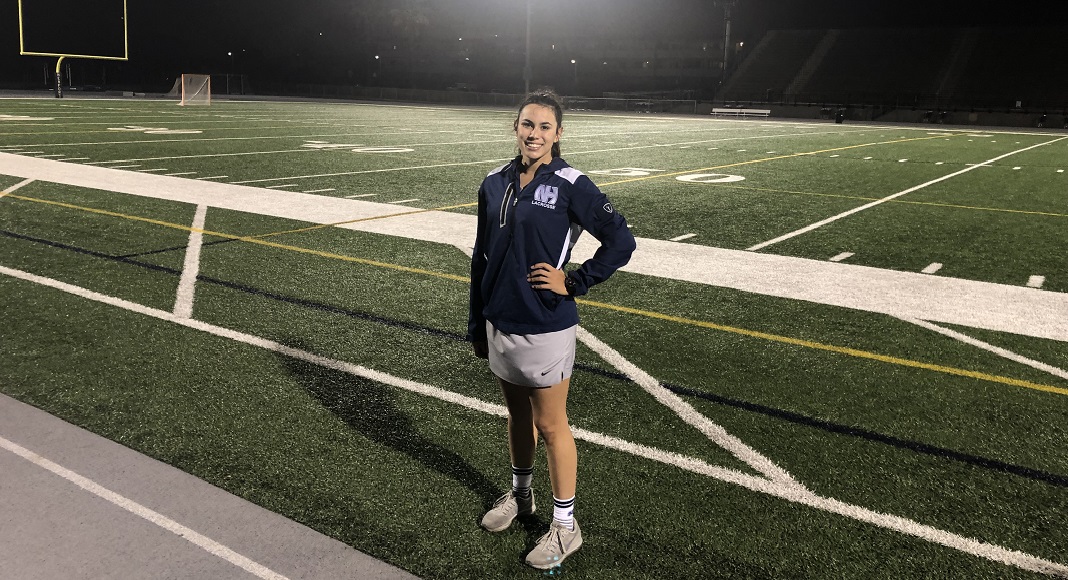 The Newport Harbor girls lacrosse team delivered coach Brooke Martini her first playoff win as the Sailors coach Tuesday, beating league rival Los Alamitos 14-7 in the first round of the OC/IE Championship Tournament. The Sailors (10-8) will play top-seeded Foothill, an 18-4 winner over Yorba Linda, in the quarterfinals Thursday at Tustin High School.

Delaney Knipp (pictured) led the Sailors with eight goals. Her seventh goal of the game gave her 100 career varsity goals.

“I felt like I had come a long way from my junior year, where it took me five games to even score a goal,” Knipp said.

The Sailors started the game strong, leading 3-0 after the first 3:20 of play. The Griffins stayed within striking distance thanks to the stellar play of Riley Deutsch, who scored the Griffins’ first three goals.

“I think the key was watching out for [Deutsch],” Martini said, “and making sure that we’re playing body, we’re sliding early and we’re doing our best to not let her shoot the ball.”

After those three early goals, Deutsch was held scoreless the rest of the game.

The Griffins tied it at 4-4 at the 9:56 mark of the first half courtesy of Sydni Jenkins, but Knipp, Mariana Miller and Joelle Rothbard each scored goals to give the Sailors a 7-4 lead at halftime.

That lead grew to 11-4 early in the second half until Skyler Kustich scored at the 16:51 mark, halting a Sailors’ scoring run that had lasted from the 8:05 mark of the first half. Still, Newport’s six-goal lead was too much to overcome, as the Sailors responded to the Griffins’ goals with their own each time Los Al scored.

“All I ask is that they gave me 100 percent of everything they had,” Griffins coach Courtney Novak said, “and that’s what they did. Even though we didn’t come out on top, I’m so proud of them, and we had a phenomenal season.”

Deutsch led Los Alamitos with three goals, Kustich scored two and Jenkins and Gillian Martinez scored one each for the Griffins, who got seven saves from Madison Shean.

Much like the Sailors, the Griffins were trying to earn Novak her first playoff win as a head coach. Despite the loss, Novak was proud of her team and said she learned a lot as a first-year head coach.

“I’ve learned how to rally and how to find the positives even when you think it’s done,” Novak said, “because I’m the leader. I’m the one they feed off of. If I don’t believe we’re going to win, they’ll never believe it, so I just constantly have to believe that we will achieve.”

The Sailors play Foothill at Tustin High School on Thursday with a time to be determined. Knipp didn’t play in NH’s first meeting with the Knights and is looking forward to facing them in the quarterfinals.

“We’re going to have to come out and really focus on doing everything the way it’s supposed to be done,” Knipp said, “which is something I think we can do. There’s no room for missed passes and unforced errors.”