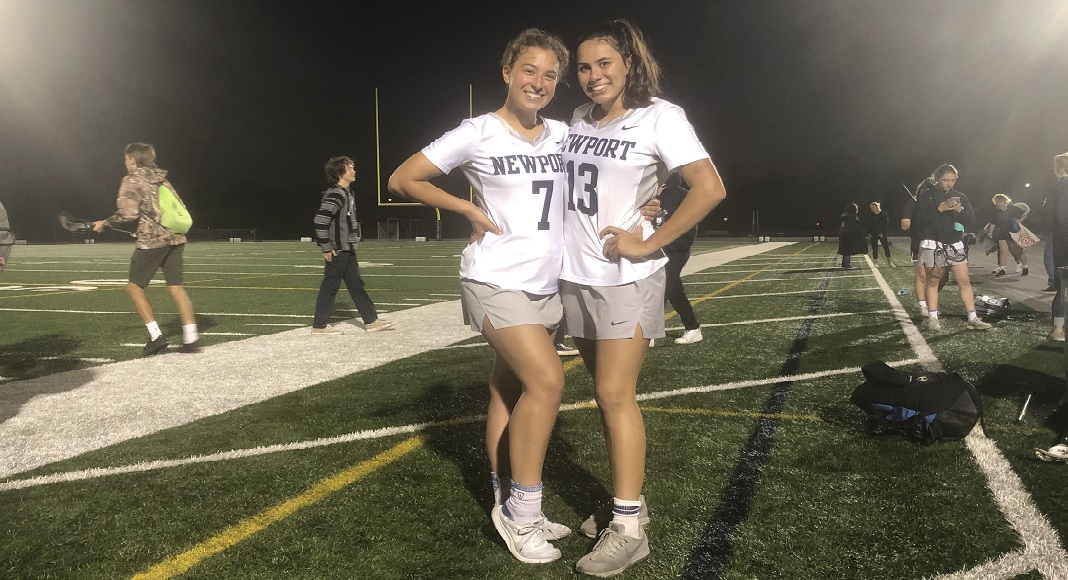 The Newport Harbor girls lacrosse team used a big second half and nine combined goals from Delaney Knipp (5 goals; pictured right) and Mariana Miller (4 goals; pictured left) to beat JSerra 15-9 on Tuesday at Newport Harbor High School.  The Sailors were down 7-6 at halftime but pulled away once Knipp, who was held scoreless in the first half, found her stride.

“I think in the first half we came out flat-footed, we weren’t really ‘there yet.’ In the second half, we had a great talk and we kept going. Once we get on a roll, we [continue to] go,” Sailors coach Brooke Martini said.

After the Sailors scored the first goal of the game, the Lions rattled off three straight goals forcing Martini into a time out. All of the Lions’ goals came from the scoring duo of Paris Melberg and Kennedy Mason, who finished with five and four goals, respectively.

The Sailors tied the game at 3-3 thank to a goal from Olivia Gritzmacher, until Mason broke the tie at the 16:43 mark and Melberg added a goal of her own three minutes after that to give the Lions a 5-3 lead. The Sailors eventually tied the game at 6-6 courtesy of Miller until Mason added a final goal of the first half at the 2:21 mark, giving the Lions 7-6 lead at halftime.

The Lions held Knipp scoreless in the first half, as her shots either hit the post or were saved by Jenna Nowland, who had six saves.

“She’s a stellar player, just a really good athlete. I think the first half was a little difficult, the sun was directly in her eyes, but she was able to come up with a lot of saves and play really well,” Lions coach Maggie Mawhinney said of Nowland.

The Sailors started the second half on a fast note by scoring four unanswered goals in less than six minutes to build a 10-7 lead, forcing Mawhinney to call a timeout.

The time out seemed to work initially for the Lions, as Melberg cut the Sailors’ lead down to 10-8 after nine minutes had passed. But the Lions got no closer, as the Sailors scored five straight goals by dominating possession on the offensive end and Willa Rath, who finished with seven saves, stepped up her play on the defensive end. The Lions’ last goal came with 45 seconds left courtesy of Mason, but it was too little, too late.

“Delaney’s a great player. I think we were looking to stop the fast break as best as we could,” Mawhinney said of Knipp.

The Sailors’ next game is against Santiago on Thursday at home at 6:30 p.m. A win for the Sailors, who are ranked 8th, could all but lock up a home playoff game.

The Lions (5-7) return to action on Thursday at Mater Dei in a Trinity League game at 6 p.m. Mawhinney said that the Lions, who are ranked 14th and also play Trabuco Hills at home on Friday at 6 p.m., aren’t looking that far ahead to playoffs and will take it one game at a time.