Knights Advance to Final With Win Over Trabuco Hills 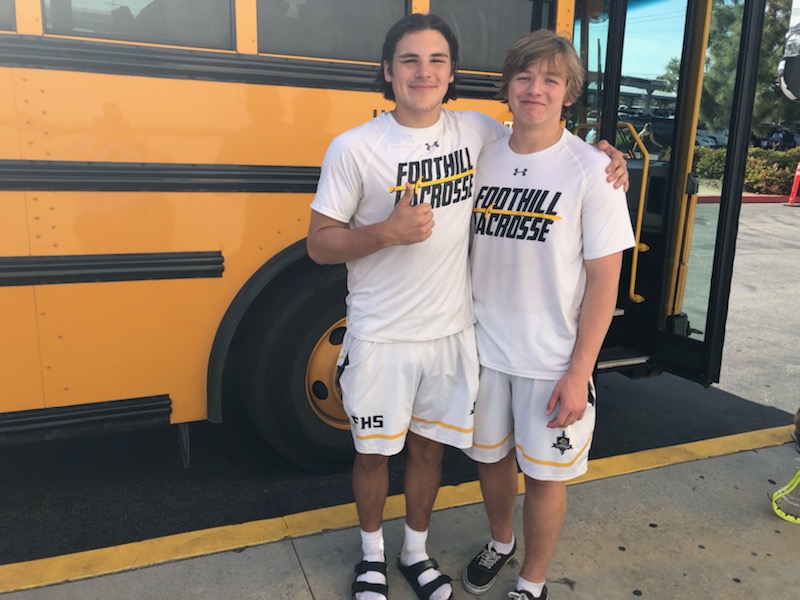 Just like their lax sisters did earlier in the day, the Foothill boys lacrosse team advanced to the Orange County championship game with surprising ease. The male Knights dominated play on both ends of the field to beat Trabuco Hills 17-4 in Saturday’s semi-final at Segerstrom High School.

The Knights (15-6) will face St.Margaret’s on Wednesday at Newport Harbor High School. The Tartans beat Corona Del Mar 12-5 in the other semifinal.

Not wanting another close game like Thursday, Foothill held Trabuco Hills scoreless in the second quarter thanks to its stingy defense and strong goalie play from Joey Garcia. Meanwhile, the Knights were relentless at the other end of the field and scored eight unanswered goals to take a 12-2 lead into halftime.

“The defense has a lot of pride and they want to show what their capable of. They play aggressive and today they played really strong. Trabuco’s a really good team and to step up like that, it shows a lot,” Knights coach Jon Fox said.

It was more of the same after halftime. The Knights put the game on ice with a 15-2 lead and a running clock before Holden Evans ended Trabuco Hills’ scoring drought. But the deficit proved to be too much for the Mustangs, who were making their first semifinals appearance in team history.

Babb and Burton each had two goals for Foothill while Riley Ahern, Caden Salkfield and Easton Jellerson each had one goal. Garcia made six saves for the Knights.

Trabuco Hills (17-3) was led by Evans and Switzer, who each had two goals. Chris Demarco, who started for Cooper Gatine (sick), made three saves.

“I knew it [being shorthanded] was inevitable, but we came out and played and took it on the chin. It’s sad that we had to eat it like that, but I don’t want it to diminish our year. We had a record breaking year, our work ethic, our attitude was brought out this year,” Mustangs coach Eric Bassett said.