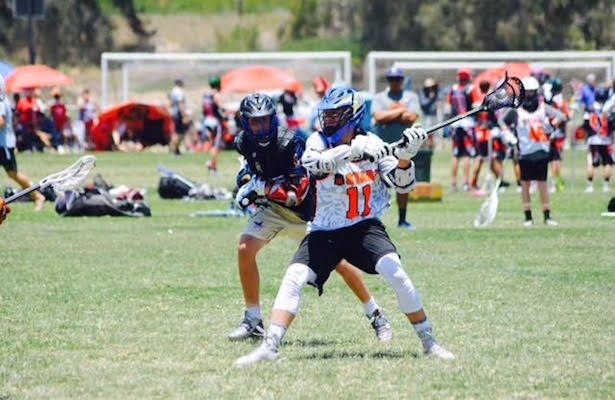 Who are These Guys?
395 Starz is a fairly new club based in the Temecula area.  They began in the summer of 2011 with two teams and have expanded to seven teams this summer ranging from U11 to HS Elite. They are best described as young and up and coming. The majority of their players are rising freshmen, and they do not have any rising seniors on their roster.  The majority of this group were on the 395 U15 team that played in the Pac Lax U15 Elite Division Championship last summer.

How are They Doing This Year?

Not too shabby, actually.  395 Starz enters the PLF with a 9-1 record. They were undefeated (5-0) at the Battle of LA and took home the High School Championship (5-0),  and went 4-1 at the Adrenaline San Diego Summer tournament, good enough for third Place (4-1).

Pymm is the rock of the team. He is a two-way player and an incredible athlete. He has been playing lacrosse since he was in 6th grade and is an extremely talented downhill dodger. Chase has played on the 395 Elite team since the fall of his freshman year.

Amiatu received 1st Team All-Valley League as a freshman racking up 60 goals and 28 assists as a first-year varsity player. He is big at 6’2 and agile with extremely soft hand and an accurate shot. Amiatue is equally efficient lwith both hands,  and is a constant threat to score.

Crisler is another pure athlete standing over 6 feet tall.  He can rip, and  by far has the fastest and hardest shot on the team. He is incredible in transition, often bull dodging his way into the offense box. If he is given time and room he will make opposing teams pay for it.

Sanchez is an 8th grader who has played up for three years now, he is the quarterback of the attack and can finish inside, outside, on the run, and feed under pressure. He is a remarkable player with very high field awareness.  Watch people’s eyebrows rise when they hear he hasn’t even started high school yet.

Fiacco is the team’s number one defender.  He will spend the weekend guarding the opposition’s number one attackman. Louie was a varsity starter for Great Oak High School, a Top 10 in Orange County.  He attended Adrenaline Black Card this summer. Fiacco plays a fundamentally sound style of lacrosse that forces opposing players into low percentage shots.