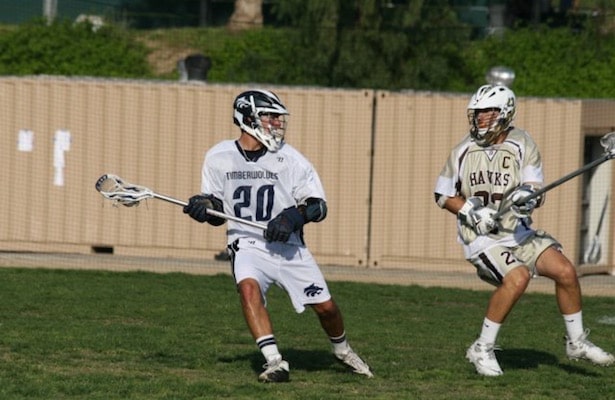 Kevin Rowen will be coaching his alma mater, Northwood High School, this season. Rowen’s lacrosse background is uniquely Southern Californian. He was the only freshman to make Northwood’s first CIF team in 2008 and then moved on to UCLA where he was captain and president of the MCLA team. Rowen took some time to chat with MaxLaxOC.com about his experiences, his homecoming, and his plans for the Northwood program.

MaxLaxOC.com: You are part of a growing trend of players that grew up playing lacrosse in the OC, and are returning home to coach. How does it feel coming to your high school alma mater to coach?

KR: It feels great. I’ve seen the sport grow tremendously in Southern California, and especially in Irvine. My freshman year of high school was the first year that Irvine Unified School District sponsored CIF lacrosse, with only 24 guys on the team. I was lucky enough to make it as the only freshman and had the opportunity to start on varsity. Seeing where the program was back then in 2008 to where I left it as senior in 2011, to now having the team going on five straight winning seasons dating back to my senior year and consistently having over 40 people in the program the last few years, it’s exciting to see the growth and I hope I can continue building on that.

MaxLaxOC.com: Tell us a little bit about playing for UCLA and the MCLA experience in general.

KR: Playing at UCLA was a dream come true for me. Both of my parents attended UCLA, and I grew up watching Bruins sports games on TV and going to basketball games at Pauley Pavilion with my dad. As a little kid I always dreamed of playing basketball for UCLA, but as a short guy without a jump shot, I quickly learned that wasn’t going to happen. Sophomore year of high school was when my coach first pulled me aside and opened up my eyes to the fact that I had the opportunity to be an athlete at UCLA through lacrosse. At UCLA I was lucky enough to be surrounded by a great group of teammates and coaches who trusted me to be the team President off the field and Captain on the field.

The MCLA experience itself really differs depending on what school you attend. For us at UCLA, academics always came first, and sometimes allowances for other events were made, especially in the offseason. We practiced hard and wanted to win, but the coaches understood that there’s a balance between school, social life, and lacrosse. I know at some other schools the teams are much more serious and might not allow players to be in fraternities or other affiliations, and then again at other schools they don’t practice much at all. So it just depends on where you are going to school, but what I will say is that there is definitely an MCLA team that will fit your style, whatever you may be looking for on either side of the spectrum.

MaxLaxOC.com: What style of play do you like to use?

KR: As I progressed as a player I became much more of a facilitator. I never minded being the guy making the pass to get the offense going because I understood that it had to be done in order for us to be successful. Although in my earlier days I was much more of a dodger, I was more of a quarterback in college focusing on feeding and finishing.

MaxLaxOC.com: What are your three top priorities for this season?

KR: First goal is to have a winning season. As I mentioned, that didn’t happen before my senior year at Northwood but the team has had a winning season every year since then, and I don’t want to have that streak snapped anytime soon. Second goal would be to be the top Irvine team among the four IUSD schools. Third goal is to beat Beckman – which Northwood has only done once ever, my senior year – and try to claim a league title.

KR: In high school it’s definitely the win against Beckman my senior year. It was raining, we were playing away at Beckman, down by 2 or 3 goals for most of the game but made a fourth quarter comeback. With around 20 seconds left our goalie made a save and I broke straight to the midfield line where he hit me with an outlet right away. I remember looking up at the clock and seeing 17 seconds left, my coach screaming on the sidelines for me to make a play, and then getting quadruple teamed. I found the open guy on the crease and he netted a one-on-one with the goalie to win the game.

In college, my first ever game – against USC, during alumni weekend with a lot of fan support on the sideline – was pretty great, especially scoring on my first ever collegiate shot. Scoring my 100th point and getting slashed under my helmet to the tune of a bloody nose is something I won’t forget anytime soon either.

KR: I’m especially proud of the team I coached in the 2013 JCC Maccabi Games alongside then-Beckman coach Seth Mahler. Our guys, Team OC, were playing against teams from around the country, and although we went 1-3 in pool play, we upset Team Philadelphia and Team New York in the playoffs before falling in a close finals matchup with Team Baltimore. The guys really rallied together to show that the West Coast wasn’t just going to roll over to the teams from back east.

MaxLaxOC.com: Do you like to give inspirational speeches to your players before the game?

KR:When I was a captain at Northwood my senior year I definitely was known to give some speeches, but at UCLA I usually left the pump up talks to one of my co-captains. If things were a little more serious or the team needed a wake-up call, that was usually my cue to give a little speech. As a coach, especially due to the fact that I am not that far removed from my players age-wise, I like to give speeches that level with them and connect with their perspectives as much as possible.

MaxLaxOC.com: What is your favorite movie?

MaxLaxOC.com: Would you say you are quiet on the sidelines or do you like the guys to hear you?

KR: I think my coaching style is still developing, but I wouldn’t consider myself a screamer on the sidelines. I’m certainly vocal, and I’ll likely be calling out plays and trying to get the defense loud themselves, but I probably won’t be yelling my head off out there.

MaxLaxOC.com: What is one thing about you that most people do not know?

KR: When I first started lacrosse at 11 years old, I actually wanted to do fencing instead of lacrosse because I saw it on TV during the Summer Olympics. A friend convinced me to do lacrosse… guess it worked out pretty well.

MaxLaxOC.com: What advice do you have for the high school player who wants to play in college?

KR: There’s a fit for you academic-wise and lacrosse-wise, whatever you’re looking for in a school and team, you just have to look for it. But whether you want to play club or NCAA, don’t forget that school comes first.