Kelly Baker is the Girls’ Lacrosse Coach of the Year 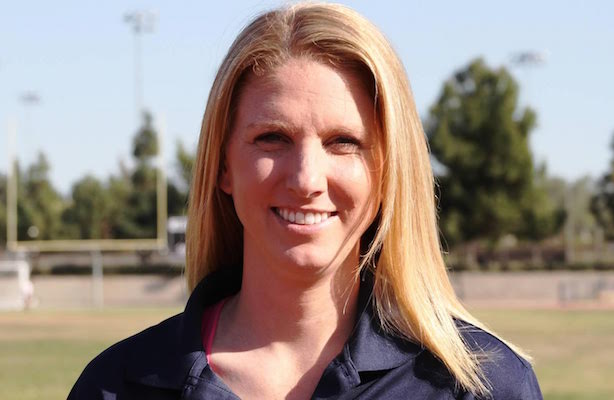 Don’t Stop Believin’.  Journey sings it.  Beckman High Schools’ first year girls’ lacrosse coach Kelly Baker lives it and instills it in her team.  After two years of coaching at Irvine High School, the former University of Arizona defender, took the helm at Beckman this season and led the Patriots all the way to overtime of the South Division Finals.  And if you ask Baker or her players, Believin’ was the foundation of their success.

Baker describes the key to success like this “Believing. At the beginning of the season we all sat down and created our pyramid of success. We built the ladder of how we would reach our ultimate goal and it was understood that if any of the pieces weren’t there, it would crumble so everyone had to believe that the top of the pyramid was possible and that in order to reach it, each step and each level would need to be reached. This was an extremely talented group of players and I knew they would have a great season, but what made it an incredible season was believing in themselves and each other. And that belief showed thought the season, especially at the end of regular season and throughout playoffs.”

Beckman’s All American goalie Claire Duchene talks about Baker’s influence on the team “Coach Baker is a person who strongly believes in the power of setting goals and as a team I felt this helped us visualize what we wanted to achieve and make it more of a reality from an abstract idea. Also being a new coach to the team this year, Coach Baker had a good understanding of the team and when to push us or when to let us solve things amongst ourselves, which I thought was important to the team functioning as a unit.”

A tireless worker, Baker also coaches and is actively involved in local girls’ youth lacrosse. Perhaps the most impressive thing about Baker is how far her sphere of influence extends.  She is not only admired by her players but also by parents, opposing coaches and referees.

One parent Beckman says ““Kelly combines passion and competitiveness with an even keel temperament. We faced numerous injuries to key starters throughout the season but she never let the girls get too high or too low. She strongly believed in the girls and instilled that in them regardless of circumstances.”

St. Margaret’s coach Holly Reilly says “Kelly Baker deserves Coach of the Year due to the thoughtful strategy and execution of her team’s game plan.  In watching both the semifinal and final CIF games, it was evident that her team was prepared for the opposition and ready to make necessary adjustments. Kelly motivates her players with positive coaching and high expectations.”

Kelly  took some time out to chat with MaxLaxOC.com.  Keep reading to learn a little more about her.

Please tell us a little bit about your background – where did you play, how long have you been coaching?

I grew up in the Bay Area in San Carlos. My whole life I always played all different kinds of sports. In high school I played volleyball soccer and softball. I was a year-round athlete so when I went to college at the University of Arizona I didn’t know what to do in my spare time! I looked up club teams at the school and found they had a lacrosse team which I had never even heard of the sport before. So over winter break I bought my first stick, taught myself how to catch and throw and at age 19 I took up the sport that would pave my future.

I was the defensive coordinator for U of A for one season. When I moved back to California, I volunteered at Glendale HS and became the head coach for 2 years at Irvine HS. This is my first year at Beckman. I also coach for Victory Select.

What 2 or 3 special memories do you have about this year?

What do you attribute the Patriots success to this year?
Believing. At the beginning of the season we all sat down and created our pyramid of success. We built the ladder of how we would reach our ultimate goal and it was understood that if any of the pieces weren’t there, it would crumble so everyone had to believe that the top of the pyramid was possible and that in order to reach it, each step and each level would need to be reached. This was an extremely talented group of players and I knew they would have a great season, but what made it an incredible season was believing in themselves and each other. And that belief showed thought the season, especially at the end of regular season and throughout playoffs.

What were your thoughts in the final minute of regulation in the playoff game against Foothill before Taylor Stern stole the inbounds pass? How about after the steal? Was it an emotional roller coaster?
I talk a lot about buying in in order to execute whatever it is we are trying to accomplish. Early on in the season our full pressure defense failed on several occasions and it was because girls were not fully buying in to the concept. A full pressure defense needs to be executed by all involved at the same moment. So we worked a lot on these type of situations in practices and the buy in started happening because there were results in practice. We were putting some great pressure on Foothill’s offense, but they also have great stick work and control so although I never stopped believing in our girls, I knew it would be tough to force a turnover.

I honestly didn’t even know where Stern came from. There were players that blocked my view from the play happening so I was confused when I heard the roar of the crowd until I saw Stern streaking down the field with the ball. It’s an indescribable feeling– the new life that Stern created for her team is something that cannot be taken away from them.

What are your goals for the team for next year?
We are graduating some amazing lacrosse players, leaders and people, but have a bright future ahead of us. With a program like Beckman I am so lucky to have so many talented players and I see so many of them scratching at the door to be the next team to head back to the finals and finish the job. We’ll have to create a new pyramid of success for 2016!

What is your reaction to being named coach of the year?
I’m speechless. I am so honored to be recognized and very humbled. Coaching is such a collaborative journey. I am constantly listening, reading and learning from anyone I can. I love getting different points of view, advice and feedback. So to say that I am the sole coach of the year wouldn’t be right– I attribute any success I have had to the people I work with- the talented players, supportive parent group, booster board, fellow coaches and my mentor. They are deserving of this recognition.