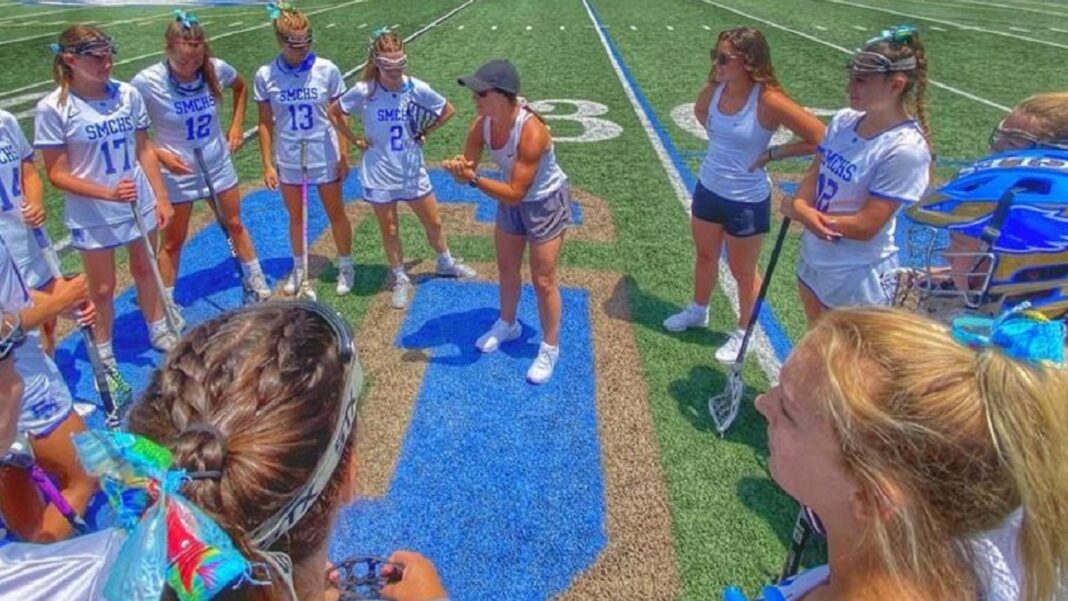 The Santa Margarita girls lacrosse team got a late start last season with a roster that, on paper at least, seemed to be a little shor on senior leadership. With only three seniors on the roster, the Eagles began practice on March 24. Most teams had already started their season a week earlier. But that didn’t give them an excuse to not be competitive.

“My program got so much closer, I grew different bonds and special bonds which each and every girl. We have a very open environment at practice and the girls know they can come to me at any time,” Santa Margarita coach Katie Jasien (pictured center) said.

Despite its youth, Santa Margarita went 15-3, tying for the Trinity League title and advanced to the CIF-SS Division 1 semifinals. For her efforts in helping the Eagles soar to greater heights, Jasien was named the Orange County girls lacrosse coach of the year via USA Lacrosse Magazine.

“I cannot even explain how honored I am to receive such a great award. This year has been unforgettable. The players, the seniors, the parents, the school, it’s such a supportive environment that I’m a part of and I can not be more humbled and grateful to receive that honor,” Jasien said.

Two of Santa Margarita’s three losses came in nonleague games against Foothill, the eventual CIF-SS Division 1 champion and Mater Dei, the co-Trinity League champion. Jasien, in her second full season with the Eagles, helped guide her team to the semifinals, where it lost to eventual runner-up Newbury Park.

Some of Santa Margarita’s wins came in close fashion, but were against high caliber opponents such as Mater Dei (9-8), Edison (10-9 OT), St. Margaret’s (13-12) and Newport Harbor (10-7). Jasien said that she and her coaching staff challenged the team in practice to keep them consistent throughout the season.

“We threw in a lot of competitive drills and games. We started doing a lot of team bonding. We did pool days and we did things outside of lacrosse just to spice it up, just to put a smile on these girls’ faces, just to remind them why they are here and what their ‘why’ is,” Jasien said.

Jasien moved from Virginia to California in 2018 and discovered the Santa Margarita girls lacrosse job opening after its season concluded. Jasien credits former St. Margaret’s coach Holly Reilly, who coaches with her at Renegade Lacrosse Club, for helping mentor her.

“I learned so much from her [Reilly], from her past being out here and what helped her be a successful coach in Orange County. I could not be more grateful for all the support I have out here,” Jasien said.

The Eagles return a majority of its players from last season’s team such as Molly Jacobson, Brooke Cressy and Brogan Webster and are primed for a big season in the spring of 2022.

“They’re going to come back wanting it even more. We have a strong team bond and I’m excited to build and add to that,” Jasien said. “I’m so grateful that [Santa Margarita] has me as a full time employee and it’s made my life so much easier getting to know these girls.”