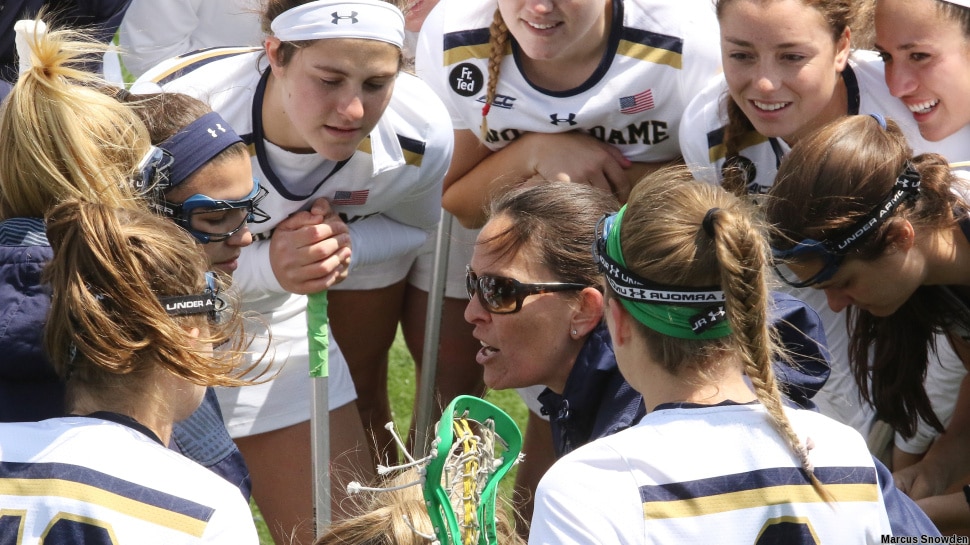 Kathleen Roe (Regis Jesuit)  was one of 11 freshmen to earn sports on the 2017  University of Notre Dame women’s lacrosse roster.  The Fighting Irish newcomers were welcomed to the program by head coach Christine Halfpenny in an August press release.  Roe will wear no. 6.

The class of 2020 features seven midfielders, two attackers, one defender and one goalkeeper, bringing the updated roster to 30 student-athletes. This marks the largest incoming freshman class since 11 freshmen signed on with the Irish prior to the 2013 season.

“We are thrilled to announce our freshman class,” Halfpenny said. “When we were recruiting the 2016 class, we knew that we had many needs for our team. We just graduated a large class that filled many on-field roles as well as huge leadership positions on the team. Each of the 11 incoming student-athletes are strong individuals that are goal-orientated, driven and hard-working young women. Individually, they bring depth and talent to each position from attack to the goalkeeper position.

The 11 freshmen hail from seven different states, including four student-athletes from Colorado, Georgia and North Carolina, all of which were not previously represented on the roster.
“It’s exciting to see how many different states this class represents. Very similar to the national footprint that our University represents,” Halfpenny said. “Bringing top players in from Maryland, New Jersey, Georgia, Indiana, Colorado, New York, and North Carolina will give this class a dynamic look. While each region may play a unique style of lacrosse, we are excited that all of the players bring their own version of our fast, aggressive, passionate and together brand.”

Roe’s bio from the Notre Dame website is presented below.

Kathleen Roe – Denver, Colo. – Regis Jesuit High School
PREP and PERSONAL: Graduated from Regis Jesuit High School in the spring of 2016 … lettered all four years in lacrosse and three years in field hockey … was a Nike “The Ride” participant … chosen as first team all-league four times and named second team all-state as a freshman … played for Colorado National Team her freshman, sophomore and junior seasons … named first team all-state three times … named league Player of the Year her junior season … chosen for the Academic All-State first team her junior and senior seasons … honored as an All-American her senior year … played for the Team 180 Lacrosse club team, which won the championship from 2012-2014 … named Sandstorm Tournament Team 180 MVP … maintained a 4.0 GPA throughout her high school career … was a member of the National Charity League … born in Denver, Colo., to Steve and Brigid Roe … full name is Kathleen Donohue Roe … mother and father graduated from the University of Notre Dame in 1990 … brother is attending Notre Dame and is expected to graduate in 2019.