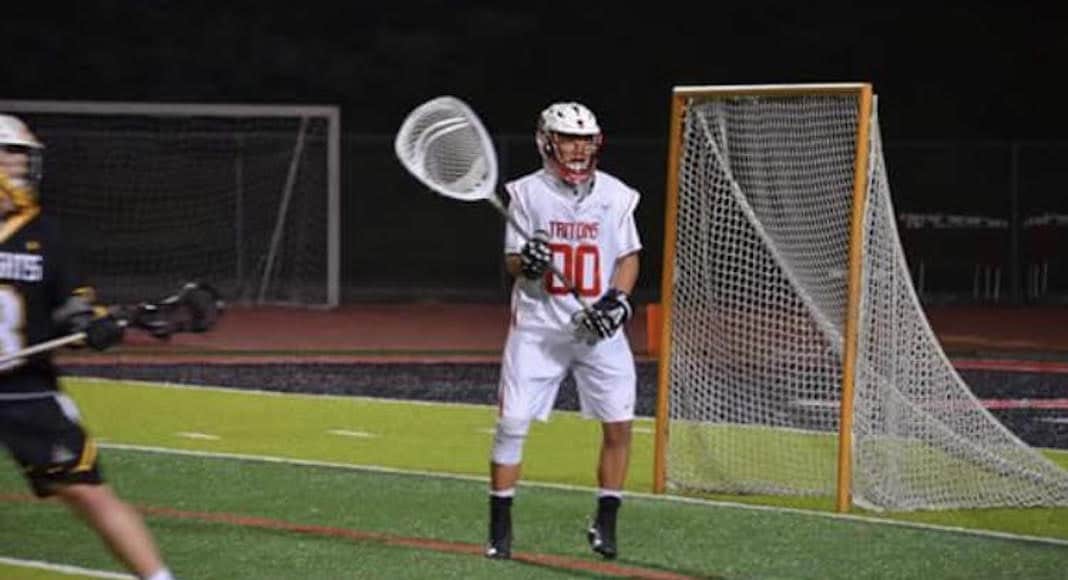 Eugene Kang repelled a relentless Foothill attack with 15 saves to lead the San Clemente boys’ lacrosse team to an 11-9 win on Saturday.  Coming on the heels of their win over Aliso Niguel on Monday, the Tritons (2-4) now have their first win streak of the season and come season end may look at Saturday’s victory over the Knights as a pivotal momentum.

“I am proud of our guys.” said head coach Brendan Finnerty by email. “We have not played a game with all of our starters yet. Today we were full strength on offense but still missing guys on defense. We have three freshman that are growing and are realizing what it takes to play varsity ball.  We have some losses earlier in the year but we are a solid team and I’m proud of our efforts. Beating Foothill is a big confidence booster moving forward.”

The Tritons never trailed in this game. After jumping out to a 4-1 first quarter lead, the Tritons were in control most of the game.  With the lead growing to 10-6 in the fourth quarter and Jake Brannon winning faceoffs at an 88% clip, the game appeared to be in the refrigerator as Chick Hearn used to say.

However, Destry Burton (6 goals) said not so fast and he and the Knights made things more interesting. Burton went on a late tear scoring three late unanswered goals and with  0:57 showing on the clock, he made it a 10-9 game.

With the fans on both sides on the edges of their seats, the Tritons withstood the pressure and added an insurance goal to seal the deal.

“It wasn’t pretty but it was a hard fought battle,” said Finnerty.

Finnerty lauded the play of LSMs Connor Guerrero and Jack Turbeville and their effective defending of their offensive threats. He also gave a shout out to Captain Dylan Hartanov who showed his dedication by playing with the flu and a 102 fever.