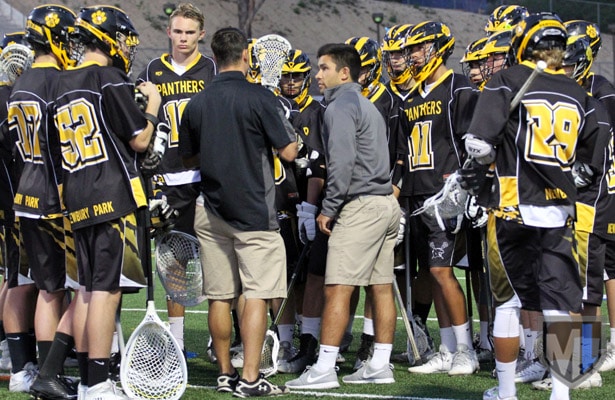 First-year head coach Grant Kaleikau surprisingly resigned his post at Newbury Park after one season, a season in which the Panthers nearly knocked off top-seeded — and eventual L.A. champion — Palos Verdes in the second round of the playoffs.

For the second year in a row, Newbury Park heads into a new school year in search of a new coach.

Kaleikau was hired last November, replacing Tim Penix, who led the program for two seasons after Geoff Sebold left in 2012. Kaleikau led the Panthers to a 14-5 record and a No. 9 seed in the U.S. Lacrosse L.A. playoffs. Newbury won at Oak Park in the first round, then lost 7-6 at Palos Verdes after rallying from a 6-3 deficit to tie 6-6.

But that success — and a strong group of returning players — wasn’t enough to convince Kaleikau to stick around. The NPHS booster club sent an email to its members with the news:

“I am writing to let you know that Coach Grant Kaleikau has decided not to return to Newbury Park boys lacrosse this school year, 2015-16,” booster club president Emily Hill wrote. “Grant has many friends in Orange County and is coaching with Buku Lacrosse club in Dana Point. One of his closest friends, Johnny Rodriguez, accepted the head coaching position at Mater Dei. Grant has agreed to join Mater Dei as an assistant coach.”

The club also posted the opening on LaxPower.com in an effort to line up candidates for the school’s administration to review.

Kaleikau did not respond to an email seeking comment.

The new coach will inherit a strong program, including returning players such as attack Chasen Colter, midfielder Erich Wuestoff and LSM Skylar Jimenez. However, the Panthers lost a strong group of seniors in the Class of 2015, including goalie Michael Marinelli and defender Chucky Smith, both two-time All-Americans, and second-team All-Marmonte League picks Preston Hill (attack) and Bryce Wallgard (defense). A JV team that went 12-3 should provide plenty of talent for filling those gaps.

Newbury Park is one of a handful of L.A. area schools looking for new head coaches. Viewpoint filled its position Tuesday, announcing that Mike Gvozden has replaced Michael Delabar. Among the other openings of which we’re aware:

Brick Conners resigned in June after three years as the Lions’ head coach and seven with the program. We haven’t seen the opening posted yet, though. Oaks went 4-11 last spring, struggling in its return to the Marmonte League after playing as an independent. The Lions were 2-8 in Marmonte League play in 2015.

Head coach Bill Adams is stepping away from the high school program after two seasons to coach his son’s youth team and to lend his lacrosse experience to a referee pool that has lagged behind the game’s explosive growth in the area.

Adams led the Vikings to a 6-10 record in Valencia’s 2014 debut season, then improved to 9-9 — including two overtime losses — last spring with a roster that featured 15 freshmen and sophomores and that graduated only five seniors.

For information on the opening or to apply, contact Steve Swigert of the Valencia Lacrosse Foundation at laxns20@gmail.com.

The Wolverines were in search of a new coach this summer after Alex Weber announced his departure in May. The posting no longer appears to be available online, but we don’t know if the position has been filled.